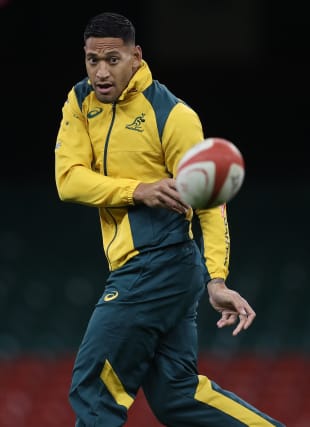 Catalans Dragons’ signing of Israel Folau is a slap in the face for rugby league’s bid for inclusivity, says the game’s only openly gay player.

The French club ignored the warnings of both the Rugby Football League and Super League with their acquisition of the 30-year-old dual-code international, who was sacked by Rugby Australia last May for making homophobic comments on social media.

The RFL says it was powerless to prevent Catalans registering the player, who has signed a one-year contract on the eve of the new season.

“Rugby league champions itself on being tolerant, inclusive and diverse and people work really hard promoting those values and this signing and the lack of being able to stop it by the RFL and Super League is a slap in the face to all those people’s hard work.

“Anyone who has a moral compass or values, this is alienating and undermining those people.”

Folau, who said “hell awaits” gay people, has promised not to repeat his comments during his time with the Dragons but Hirst, who came out in 2017, is disappointed that he has not shown any remorse.

“Everyone deserves a second chance but to get a second chance I think you have to be sorry for the mistake you made and show some remorse and want to better yourself and move one – that’s not the case,” he said.

“That’s not the case: all his anti-gay sentiment has not been taken down, he is not sorry about it.

“It is not a case of changing his belief, everyone is entitled to their beliefs, but to use those beliefs to justify any type of prejudice is not OK.

“When freedom of speech is incendiary or inflammatory, it needs to be challenged.

“Israel Folau has mentioned this repeated times. He is entitled to his beliefs – he is not going to change them because if he was he would have done it when they were tearing up his multi-million dollar Australian Rugby Union contract and he hasn’t, so he’s not going to.”

Hirst, who now plays for Championship club Halifax, has become an outspoken advocate for LBGT+ rights over the last three years.

He added: “My job, as an out, gay man who also happens to be a rugby league player, is to stand up against prejudice.

“The signing of Israel Folau not only alienates the people we have spoken about but also empowers people with the same views to be more vocal, to come into the game, because actions ultimately speak louder than words.

“We should be trying to make the world a more accepting place for when people are ready to come out.

“I understand that (religious beliefs against homosexuality) but it’s picking and choosing parts of the Bible to suit your narrative. There’s things in there that people don’t pay any attention to.

“Just like (some) people don’t like other people with different colour skin to them. That’s not OK, that’s not up for debate.

“There seems to be a thing that homophobia is lesser prejudice. If he said what he said about a different race or religion, we wouldn’t even be having this discussion. There is not a hierarchy of prejudice.”

Former Wales international Gareth Thomas, who is gay and also a former dual-code international, is equally upset by the Folau signing and says he will not watch the player.

“So Folau has joined the @SuperLeague. Really upset by this as the game, players, and fans were so good to me,” tweeted Thomas, who had an 18-month stint in rugby league playing for Crusaders and Wales in 2010 and 2011 after the end of his rugby union career.

“All I hope is that as much as Folau wanted his right to speak, then players and fans alike are aloud (sic) their right to respond. I will never watch him.”

Super League executive chairman Robert Elstone has condemned the signing and Wigan have declared their home game against the Catalans in March a ‘Pride Day’ in response – a move welcomed by Hirst.

“I think it’s fantastic,” he said. “It might be what you call gamesmanship at its finest, getting into the head of Catalans I imagine.

“He’s a world-class player and if he refuses to play that game, then it’s a one-up for Wigan, while also promoting that diversity and inclusion.

“Wigan spoke to me (on Tuesday) and said, ‘We don’t just want this to be a publicity stunt, we really want it to be a celebration of inclusivity’, and that’s a really wonderful thing.

“Maybe, would it be a bad thing if all Catalans’ away games were Pride events?”

Folau, who is expected to arrive in Perpignan later this week or early next week, will obviously sit out Saturday’s opening game of the season against Huddersfield but could make his first appearance for the Dragons in round two at Wakefield, who plan to follow Wigan’s lead.