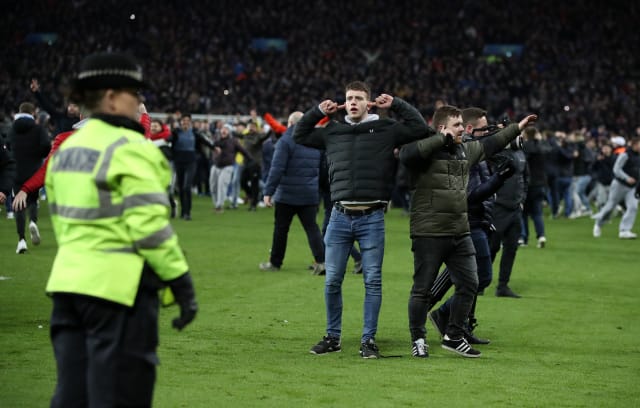 Trezeguet scored a stoppage-time winner in the second leg against Leicester, sending Villa to the Wembley final on March 1 on the back of a 2-1 victory which sealed a 3-2 aggregate triumph.

Once referee Mike Dean blew his whistle to signal full-time, thousands of Villa fans took to the pitch to celebrate the club’s success.

Announcements over the public address system, and a message on the screen inside the ground urging the supporters to return to their seats, went unheeded.

It led to players from both sides being surrounded by fans, although it is understood the invasion was overwhelmingly good-natured.

It has been suggested Foxes midfielder James Maddison was pushed to the ground at one stage – however the PA news agency understands Leicester have made no complaint about the matter.

While the FA is looking at what unfolded, action will only be taken if there are reports of any incidents.

Describing the scenes, Villa boss Dean Smith said: “There was an outpouring of emotion. I think I was on the pitch myself when we scored the goal.

“It’s very difficult to not (take to the pitch). As long as they behave themselves it’s fine by me.”

Defender Matt Targett, who scored Villa’s opening goal, explained that what he experienced was “very special”.

“It’s full of emotions this game,” added Targett. “That at the end is something we’ll treasure forever.”

Asked whether it was frightening being among all the fans, he replied after chuckling: “Yeah, it was. You could see so many people running at you from different directions, but it was a nice feeling.”