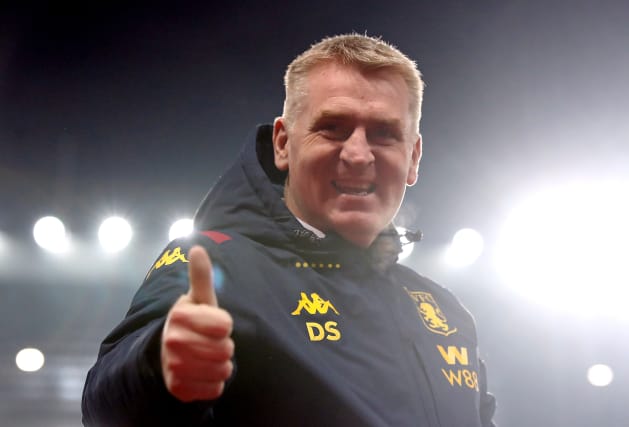 Villa secured a place in their ninth League Cup final – and first since 2010 – via Trezeguet’s stoppage-time left-footed volley for a 2-1 win in the second leg of their semi-final at Villa Park and 3-2 on aggregate.

Prior to the Wembley showdown with either Manchester City or Manchester United on March 1, Smith must now focus his players’ attention on their league campaign – starting with this Saturday’s relegation clash at Bournemouth.

Asked whether the win over the Foxes could inspire his side, Smith replied: “Yes! We’ve had a brilliant January, bar the Manchester City game (a 6-1 home thrashing). The results and performances since then have been very good.

“I said last week the last-minute goal against Watford (in a 2-1 win) would give everybody a spring in their step. We were very aggressive against Leicester and it’ll give everybody belief in what we’re doing.

“The lads can learn an awful lot playing 180 minutes against the third-best team in the league this season, managing to beat them and go to Wembley. It shows that there’s an awful lot of character and quality in the squad.”

Should Villa face City, Smith is hoping the embarrassing loss to Pep Guardiola’s side will provide added motivation.

“We helped them to a 6-1 win,” said Smith, who will be the first Englishman since Harry Redknapp with Spurs in 2009 to lead out a team in the League Cup final.

“My players know that. But I’ve had a very good response from my players since then, going to Brighton to get a draw, beating Watford and now beating Leicester.”

Smith was also delighted with the debut of new striker Mbwana Samatta, despite the Tanzania international missing a gilt-edged chance just before he was subbed after 67 minutes that would have given Villa a 2-0 lead.

After playing four matches without a recognised forward, Smith has options again as Keinan Davis replaced the £8.5million signing from Genk after three months out with a hamstring injury, and the 21-year-old looked sharp.

“He stretched defenders and gave (Caglar) Soyuncu and (Jonny) Evans a tough time. He linked it up very well at times but he’ll get better.

“He probably needed to sort his feet out in the second half for the chance Jack Grealish gave him, but he showed us the potential he has, and Keinan Davis being back for 25 minutes was great.”