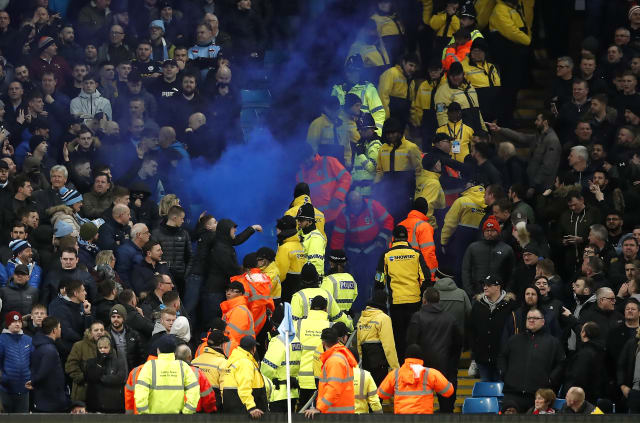 Manchester City and Manchester United went toe-to-toe for a place in the Carabao Cup final at a time when both sets of fans are under scrutiny.

Here, the PA news agency sums up the issues and the atmosphere inside the Etihad Stadium on Wednesday evening.

Pep Guardiola irked many of his own supporters at the weekend when expressing his frustration at the number of empty seats for the FA Cup fourth-round clash with Fulham. A lack of understanding at the expense of going to a match shown on terrestrial TV got under the skin and the City boss attempted to clarify his remarks on the eve of Wednesday’s semi-final second leg.

A toxic atmosphere has steadily grown around United in recent weeks, reaching its peak on Tuesday evening as executive vice-chairman Ed Woodward’s house came under attack from a small group of fans. Cheshire Police are investigating the incident that came after sinister chants aimed at Woodward and the Glazer family in recent matches.

An entertaining Manchester derby was played out to an impressive backdrop – and thankfully none of the alleged racism that marred the December meeting here. City boss Guardiola got the support he called for before kick-off at a packed-out Etihad Stadium, where Woodward was in attendance having been absent for recent matches. There was not as much audible dissent aimed the United chief’s way as had been heard at recent games and manager Ole Gunnar Solskjaer’s name was chanted with gusto throughout. Most of the visiting fans’ focus appeared to be on antagonising the home faithful. Tit for tat chants were traded from the outset about fanbase and support, while a red smoke cannister appeared to be thrown into the home section after Nemanja Matic’s first-half strike. Half-time took the heat out of things as tension took over. Matic’s second-half red card increased the incline on United’s uphill battle in this semi-final, with United winning 1-0 on the night but losing 3-2 on aggregate as City fans celebrated semi-final success.