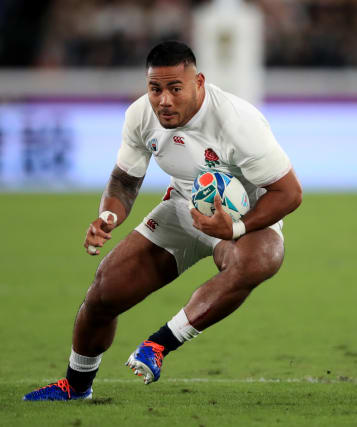 Manu Tuilagi shudders at the prospect of another World Cup training camp after retreating to the sofa to recover from England’s march to last autumn’s final.

Tuilagi is set to continue at outside centre for the Guinness Six Nations opener against France on Sunday in England’s first appearance since losing 32-12 to South Africa in Yokohama.

The 28-year-old Lion revealed in Japan that it would be his final World Cup and he admitted the build-up was brutal.

“Thinking about the training we did beforehand. Twelve weeks in camp was tough, I don’t know how I got through it. To think about doing it again…” he said.

“I played for Leicester the week after I got back from Japan. It was good to get straight back into it. The World Cup was disappointing but it’s gone now.

“Being back with my club helped me, I got back into rugby straight away. But it was strange coming back home after being away for four or five months.

“I was waking up at half six in the morning thinking we’ve got training when actually there wasn’t.

“It was enjoyable coming back home to the family – the missus, the little one, the dog.

“It was nice to take the dog out for a walk, sit on the sofa and just watch TV. That was the best thing.

“It is just nice to be on the sofa. It’s so good isn’t it? When you get home it’s great. But I can’t sit down for many hours because of my little one.”

Tuilagi was among England’s stars in Japan but he suffered a worrying setback in December that left him fearing “game over”.

The Leicester battering ram tweaked an adductor muscle on club duty for December, an injury that brought back memories of the serious groin issue that once threatened his career.

On this occasion, however, he was only forced to miss three games and has since made his comeback.

“Game over,” said Tuilagi when asked for his initial reaction when suffering the injury.

“I know my body well now so I have got to listen to it and be honest with the physios and strength and conditioning guys. They’re there to help me and, if I’m honest with them, they’ll be able to do that.

“When you’re younger you try to play through it all the time, but you’re just making it worse. Now I’d rather sort it out in one week or two weeks instead of four or five months.”

“You think you have tackled him and then he gets an offload away and they’re under the sticks.

“You never know what the French team are going to bring. We have to be ready for anything.”