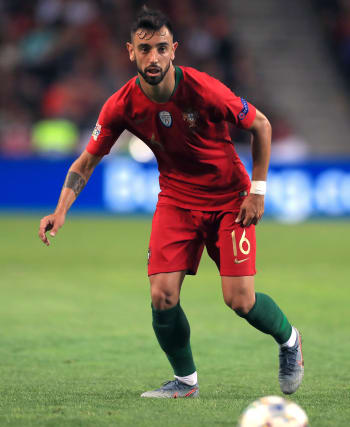 Bruno Fernandes is close to joining Manchester United after a significant breakthrough was made in talks with Sporting Lisbon, the PA news agency understands.

Having considered a move for the Portugal international over the summer, the 25-year-old was made the Old Trafford giants’ number one target this month.

United and Sporting have been at loggerheads over Fernandes’ valuation, but it is understood a deal to take the midfielder to England is now close.

Final figures and personal terms remain, but a fee of 55million euros (£46.6million) and a further 10 million euros (£8.5million) in add-ons is believed to have been settled on.

Those add-ons are understood to be based on appearances and Champions League qualification, while it would take a hugely successful stint at Old Trafford to trigger a further 15m euros (£12.7m).

A four-and-a-half-year deal is on the table for Fernandes, for whom Sporting are believed to have initially demanded 80million euros (£67.8m) up front.

Barcelona were among the other clubs believed to have been interested in the 25-year-old, who played in the Lisbon side’s 1-0 defeat of Maritimo on Monday.

The move is subject to a medical but United are confident of getting the deal over the line – a boost for a side still left light in midfield by the departures of Marouane Fellaini and Ander Herrera.

Ole Gunnar Solskjaer is understood to have wanted to bring in a central midfielder over the summer, while injuries to Paul Pogba and Scott McTominay have compounded matters.

But United, who have tracked Fernandes since 2015, now appear to be getting their man – a player Solskjaer had been coy about ahead of Wednesday’s Carabao Cup semi-final against Manchester City.

“I haven’t got any updates for you on transfers,” Solskjaer said with a laugh on Tuesday morning. “I think it was a waste (of a question) – I gave you the option (not to ask it)!

“I haven’t got anything to say now. My mind is just on the game.”

The United boss later said: “We are players down with injuries so of course we’ve looked at options.

“But we’re not going to sign players here for the sake of just signing a player to have one more number.

“I’ve said it so many times, you’ve got to be right for the place.

“If it’s a loan until the summer to help us, it’s still got to be someone that helps the squad that’s here.

“And if it’s a permanent signing, it has to be someone that is in our plans for the future.”

Asked if the failed January signing of Alexis Sanchez had put United off acting in this window, Solskjaer said: “No, I wouldn’t think so.

“But it’s not many teams that would let their best players go in January.

“We signed a good player there. He’s had so many injuries, so he’s been unlucky. You can’t vouch for all those injuries either.”

Sanchez would have been a welcome option at this point given the lack of numbers and Solskjaer expects him to have an Old Trafford future when he returns in the summer.

“Alexis will come back in the summer and prove you all wrong,” the United manager said.

There continues to be talk about possible outgoings, but Solskjaer does not expect Marcos Rojo to leave amid links to former club Estudiantes.

The Argentina international, who has not played for two and a half months, trained on the eve of the City match, as did Nemanja Matic despite picking up a knock in the FA Cup win at Tranmere.

The 31-year-old is out of contract in the summer but United can trigger a one-year contraction extension.

“So, for me, Nemanja is a top professional and we are keeping in touch with him and we are talking to him, yeah.”