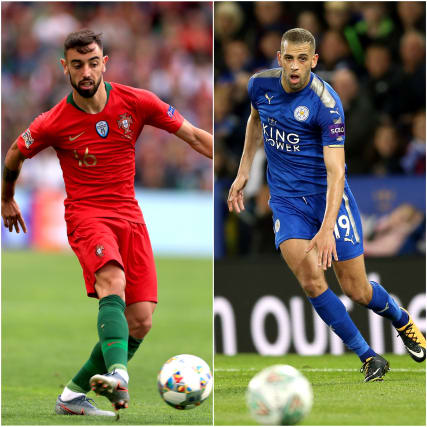 Leicester striker Islam Slimani has asked to end his loan at Monaco after Manchester United made a shock enquiry for him, says the Daily Mail.

Thomas Lemar is edging closer to a transfer to Arsenal, with the France winger being left out of Atletico Madrid’s LaLiga draw against Leganes on Sunday, The Sun reports.

Chelsea are poised to launch a late challenge to Tottenham for the signing of AC Milan and Poland striker Krzysztof Piatek, according to the Daily Mirror.

Arsenal are expecting an approach from Spanish champions Barcelona for Gabon striker Pierre-Emerick Aubameyang, according to The Daily Telegraph.

Pablo Mari: Arsenal are trying to salvage their £7.5m deal for the Spanish defender after his club Flamengo called it off on Monday, the Daily Mail reports.

Emre Can: Manchester United, Arsenal and Tottenham are all interested in signing Germany midfielder Can from Juventus, according to Metro.

Danny Rose and Kyle Walker-Peters: England full-backs Rose and Walker-Peters are expected to leave Tottenham on loan before the transfer deadline, says the Evening Standard.