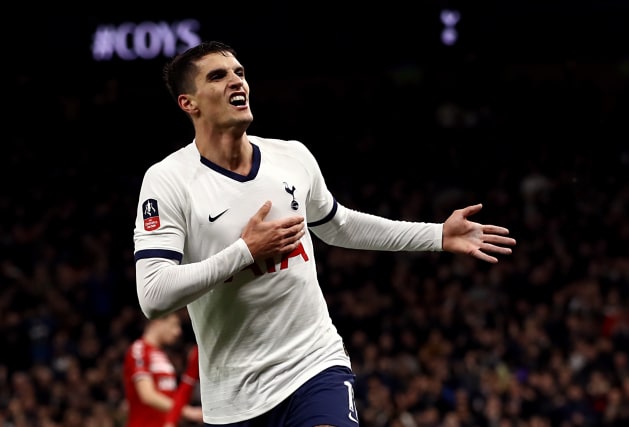 Christian Eriksen’s departure to Inter Milan means that Erik Lamela is the only remaining member of Tottenham’s ‘Magnificent Seven’.

Eriksen and Lamela were two of the seven players Spurs brought to the club under Andre Villas-Boas in the summer of 2013 using the money generated from Gareth Bale’s move to Real Madrid.

Here, the PA news agency takes a look at what has happened to those players.

The Brazilian arrived from Corinthians for £17million and an impressive start gave hope that he could be a star in the Premier League. However, he could not make it last and he did not fit Mauricio Pochettino’s style, moving to Chinese club Guangzhou Evergrande in the summer of 2015 after 10 goals in 67 appearances. He raised eyebrows by later being sold to Barcelona, but he is now back in China for a second spell. Verdict: Failure

Signed from FC Twente for £7million, Chadli was a regular for three seasons, making well over 100 appearances. His best campaign was the 2014-15 campaign, scoring 13 goals in 45 appearances, and was again a key man as Spurs challenged for the Premier League the following season. He was sold to West Brom in 2016 with the London club making a hefty profit. After two years at the Hawthorns he moved to Monaco and is currently on loan at Anderlecht. Verdict: Success

Spurs broke their club record to bring the prolific Spaniard to White Hart Lane for £26million, but it is not a move that worked out. It quickly became apparent that the demands of the Premier League were too much for him, especially when Pochettino adopted a pressing game. Spurs were able to recoup £10million by selling him to Villarreal in 2015, having seen him score 16 goals in 76 games. Aged 34, he is currently playing for Granada. Verdict: Failure

Capoue was bought from Toulouse for £9million but three months later Villas-Boas had been sacked and interim boss Tim Sherwood did not take to him. He found game time just as hard to find in Pochettino’s first season in charge and he was sold to Watford for just under £6million in the summer of 2015. He made 36 appearances and scored two goals and is still with the Hornets now. Verdict: Failure

An £8.5million signing from Napoli, Chiriches was a bit-part player in both of his two seasons at Spurs. One of his two goals in 43 appearances saved Villas-Boas’ job, albeit briefly, but Pochettino did not trust the centre-back and he went back to Napoli in 2015, with Spurs taking a £4million hit. He is currently on loan at Sassuolo. Verdict: Failure

Coming through the famed Ajax academy, it is little surprise that Eriksen was the biggest success story of the seven signings. He quickly became a key figure under Pochettino and the playmaker was at the forefront of Spurs’ ascent to becoming Champions League regulars. He contributed 69 goals and 89 assists in 305 appearances and saw the likes of Real Madrid, Juventus and Barcelona covet his signature. His refusal to sign a new contract and subsequent drop in form should not sour what was a great spell at Spurs. Verdict: Success

Lamela is the last man standing following Eriksen’s departure. He broke Paulinho’s record when joining from Roma for £30million, but his Spurs spell has been besieged by injury – making 97 appearances less than Eriksen in the same time. When he has been fit he has shown tenacity, skill and a work ethic that has made him a fans’ favourite. Verdict: Success