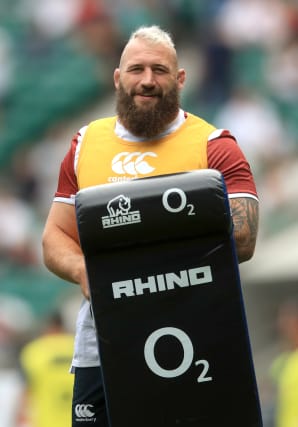 England’s seven-strong Saracens contingent have not been allowed to forget the salary cap scandal that has engulfed their club after becoming the repeated targets of Joe Marler’s jokes.

Marler is using humour to diffuse any tension over the crisis that will see Saracens relegated at the end of the season for exceeding the £7million ceiling for player wages.

Ed Griffiths has become the third casualty of the descent into the second tier of English club rugby after he departed on Tuesday just 26 days into a 12-month contract as chief executive.

And to give Marler further ammunition, Saracens have been docked an additional 70 points to guarantee they will finish bottom of the Gallagher Premiership.

Saracens stars such as Owen Farrell, Maro Itoje and Mako Vunipola have been reassured by their England team-mates training for the Six Nations opener against France that they face no animosity, but Marler is adopting his own approach.

“Huge (banter), loads of it. It’s been brilliant for me,” the Harlequins prop said.

“I had a certain amount of ammo previously but they kept winning stuff, so then you can take the mickey out of them all you want, but you haven’t got a medal to show for anything. But this has given me a bit more ammo to take the mick.

“It is the only way I know how to deal with awkward situations or slightly more serious stuff – and I like to think that has helped them to think everything is normal, we are just carrying on as normal.

“If you don’t address the elephant in the room, however you address it – whether that is by taking the p*** or not – it grows, doesn’t it?

“It becomes even more awkward. So one of the first things to do was come into camp and say, ‘if anyone has got an issue, air it now, and if you don’t want to air it – you don’t feel comfortable – go and speak to one of the boys separately’.

“There are a couple of sets of gloves that we have got in the gym as well if people want to go that far!

“Luckily it hasn’t come to that and it has been parked because you come in here and we are trying to win a Six Nations!

“The longer those conversations or any sort of resentment towards it goes on will detract from what we are trying to achieve here as an England team.”