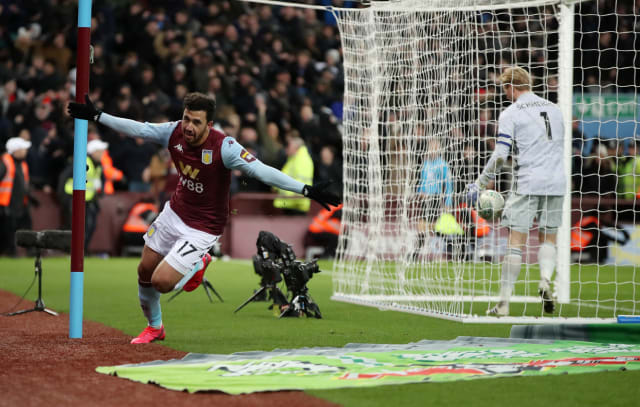 Aston Villa boss Dean Smith hailed a “goal made in Egypt” after substitutes Trezeguet and Ahmed Elmohamady combined in injury time to send the club to the Carabao Cup final with victory against Leicester.

The game looked to be heading for a penalty shoot out after Kelechi Iheanacho’s second-half strike had cancelled out Matt Targett’s 12th-minute opener for the hosts.

However, Trezeguet popped up at the far post to guide home Elmohamady’s deep cross on the volley to send Villa to a first final in the competition since losing to Manchester United in 2010.

The goal gave Villa a 2-1 win on Tuesday night, and a 3-2 aggregate success, and afterwards Smith spoke of his pride after leading his boyhood club to Wembley.

“I’ve composed myself now. I certainly let myself go when we scored that goal – a goal made in Egypt right at the end,” said Smith.

“We showed an awful lot of character. To get through means an awful lot. We’ve got a proud history in this competition, as I’ve said many times, and if we could go and lift this trophy for a sixth time as a club then I would be a very proud man.

“But we know it’s going to be tough against either Manchester United or Manchester City. But the hard part is getting to a domestic cup final and we have managed to do that against a very good Leicester team.”

Villa owe a huge debt of gratitude to goalkeeper Orjan Nyland, who produced three outstanding first-half saves, and Smith admits the Norwegian has given him a selection dilemma before the final on March 1.

“We are indebted to Orjan, who made three great saves. He was really top drawer,” said Smith. “But I’ll tell you who will play when we get round to Wembley, there’s a few games before then.

“Since we signed Pepe (Reina) he has come in and done really well for us. He had a tight calf so Orjan was always in to play this game and he has showed me what he is about.

“He’s certainly given me a conundrum but it’s the type of decision I want if I’m honest.”

Leicester boss Brendan Rodgers was magnanimous in defeat and urged his players to use the heartbreaking loss as motivation for the future.

“I’m absolutely gutted for the players. I felt over the two games that we were the better side, but congratulations to Aston Villa. They won and they are through,” said Rodgers.

“We are bitterly disappointed. We created enough opportunities and we just switched off right at the end. It’s so late on in the game that it’s difficult to come back from that.

“But I said to the players this is what you need – to get within touching distance of finals. Of course we want to get there but this will increase their determination.

“They have to use it as a great motivator going forward. We are in a good position in the other cup and going well in the league and this is another step in our process. It’s a process.

“The players are hurting, and they will tomorrow as well, but it’s part of it at this level and you have to take that – and it hurts. But that help will help going forward.”