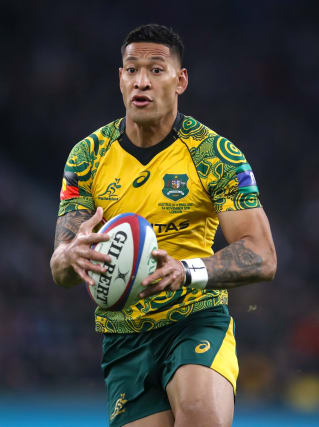 Catalans Dragons have been widely condemned for their signing of controversial Australian outside back Israel Folau.

The 30-year-old dual-code international, who has not played since being sacked by Rugby Australia last May for making homophobic comments on social media, has joined the Super League club on a 12-month contract.

Elstone reveals many informed voices within the game were against the signing and Wigan demonstrated their opposition by announcing their round six match against Catalans would be named Pride Day.

The signing of Folau, who sparked a storm in April by posting a photo to Instagram that claimed “hell awaits” gay people, prompted a strong reaction from Hirst.

“I’m shocked and disappointed at the signing of @IzzyFolau,” Hirst said on Twitter. “Our great game is tasked with fighting against homophobia and standing up for the values it puts such high stock in.

“It shows none of the bravery, camaraderie or integrity @rfl expects from its players, staff and fans.”

Folau, who played for Melbourne and Brisbane before switching codes, was told he would not be allowed to return to the NRL but the Rugby Football League has confirmed it will not prevent his registration with the Dragons, saying the moral responsibility for deciding whether to sign a player sits with individual clubs.

Elstone said: “Super League deplores the homophobic comments Israel Folau has made in the past, which squarely contradict our sport’s core values.

“I have sought the opinion of informed voices connected to our game and the majority share my disappointment that one of our clubs has chosen to sign him.

“There is a strong feeling that the decision to sign him lets down many people connected to our sport.

“I made Catalans Dragons aware of those views.

“However, Super League does not have the authority to veto the registration of players and is satisfied by the due diligence carried out by The Rugby Football League.”

Dragons chairman Bernard Guasch said: “We want to give Israel a new opportunity to shine on the pitch.

”We do not support or agree with Israel’s previously expressed and controversial views which are based upon his sincerely held religious belief.

“We do not share or condone those views and we are totally committed to our club and our sport being open and welcoming to everyone.

“We do not believe that those views should be publicly expressed, especially by a high-profile sports person.

“We have a signed agreement with the RFL. Any transgression will trigger an immediate termination of Israel’s contract and a substantial fine for the club.”

Folau said: “I acknowledge the views expressed by Super League and the Rugby Football League.

“I’m a proud Christian, my beliefs are personal, my intention is not to hurt anyone and I will not be making further public comment about them.

“I look forward to my return to the great game of rugby league with the Catalans Dragons.”