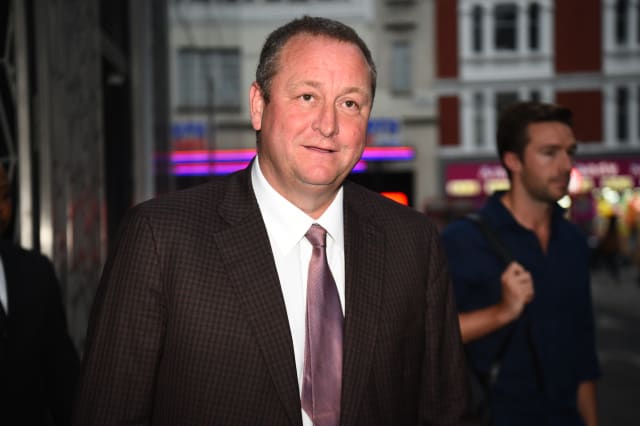 Newcastle owner Mike Ashley is in ongoing talks with two other potential buyers amid claims that a Saudi consortium is close to a deal, the PA news agency understands.

The Sports Direct magnate’s representatives are understood to be continuing takeover negotiations with both parties despite the emergence over the weekend of details of a £340million proposal funded in large part by the Saudi Arabian Public Investment Fund.

Ashley returned from a trip to the United States on Monday to find the club embroiled in fresh speculation over its future ownership. Its source was a report in the Wall Street Journal suggesting the Saudi group, spearheaded by Amanda Staveley and backed in the main by Crown Prince Mohammed bin Salman’s immense wealth, had been in discussions with Ashley for around four months.

Fresh details have emerged since outlining the structure of the bid – the Reuben brothers, David and Simon, are said to be partners, while businessman Yasir Al-Rumayyan would reportedly be installed as chairman at St James’ Park – with reports claiming an agreement is “90 per cent” likely to be reached.

However, an exasperated Ashley returned to his desk distinctly unimpressed that the matter had been made public, having stated in no uncertain terms following the collapse of Staveley’s previous bid to take over the club two years ago, that all future business would be conducted behind firmly closed doors.

With sources close to the sportswear tycoon having indicated talks with other prospective buyers are continuing, he appears to be challenging the Saudis to make a decisive move with a less than subtle shot across their bows.

In the meantime, fans who have hoped to see the back of Ashley for much of his tenure are refusing to allow themselves to be carried away, and their scepticism is understandable in the wake of failed attempts by Staveley’s PCP Capital Partners, former Manchester United and Chelsea chief executive Peter Kenyon and the Bin Zayed Group to take the club off his hands.

The latest development, however, may do little to persuade those who believe he does not genuinely want to sell that they are mistaken.

Also, Amnesty International’s response to news of the latest Staveley-led approach has added further complexities to a long-running saga.

Amnesty’s UK head of campaigns Felix Jakens branded the reported move “sportswashing” and an attempt to deflect attention from Saudi Arabia’s “abysmal” human rights record – a political issue which might come into play if and when Premier League approval were to be sought.

Gareth Davies and Ross Moriarty start for Wales against France