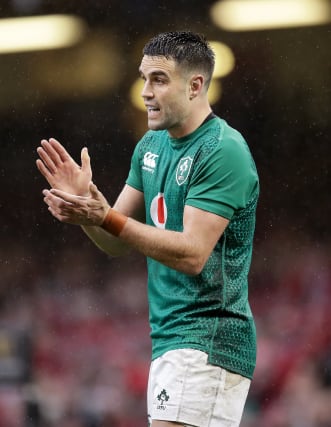 Ireland head coach Andy Farrell believes he has selected “a hell of a team” for the Guinness Six Nations opener against Scotland after favouring Conor Murray over John Cooney at scrum-half.

The choice between the experience of Murray and the fine form of Cooney was the biggest call facing new boss Farrell ahead of his first match in charge.

Munster player Murray, who has won 78 caps, has come under serious pressure for the role having previously been a guaranteed name on the team sheet.

For now, the 30-year-old retains the backing of his new coach, with Ulster’s Cooney named among the replacements for Saturday’s match in Dublin and Luke McGrath unable to break into the 23.

“We’ve got a very competitive squad and the lads have been in great form so it’s always going to be difficult,” he told the Irish Rugby Football Union website.

“You’ve got to make a decision and we’ve got a hell of a team going into Scotland.

“We’ve been pretty open with the clean slate as far as selection is concerned and we wanted to see how people came into camp and obviously we’ve been watching from afar as far as form is concerned.”

“John, everyone knows what type of form he is in. He’s had a few protocols this week as far as his HIA (head injury assessment) is concerned but he’s got a couple of sessions under his belt and he’s ready to go as well.

Farrell named his selection from the team’s training camp in Portugal.

Uncapped Doris, a former Ireland Under-20s captain, has been rewarded for his club performances with a start at number eight.

His club-mate Kelleher, who has not played since fracturing a hand on December 7, is named among the replacements and will have to wait for his debut, with Rob Herring starting at hooker in place of retired former captain Rory Best.

“The young kids are ready to go,” said Farrell.

“Caelan is super excited and Ronan, he’s coming back from injury, but he’s been back in and done absolutely everything with us so far in this camp and he’s looking very solid.”

New skipper Johnny Sexton is fit to lead Ireland into the Farrell era at the Aviva Stadium after overcoming a knee problem suffered in December to start at fly-half.

Wing Jacob Stockdale, a regular under former coach Joe Schmidt, retains his place, with Andrew Conway coming in on the opposite side, while Garry Ringrose and Bundee Aki have been selected in the centre.

Full-back Jordan Larmour completes the backs, having recovered from a foot problem sustained in Leinster’s Champions Cup victory over Benetton.

“We’ve looked after him, he’s hit all his markers. He’s been on fire, he’s back to his electric best,” Farrell said of Larmour.

James Ryan and Iain Henderson will continue their second-row partnership despite a return to form of Devin Toner, who was a shock omission from Schmidt’s World Cup squad.

Props Cian Healy and Tadhg Furlong complete the front row alongside Herring, while flankers CJ Stander and Josh Van Der Flier will play either side of newcomer Doris in the back row.