What happened on day four of the fourth Test between South Africa and England? 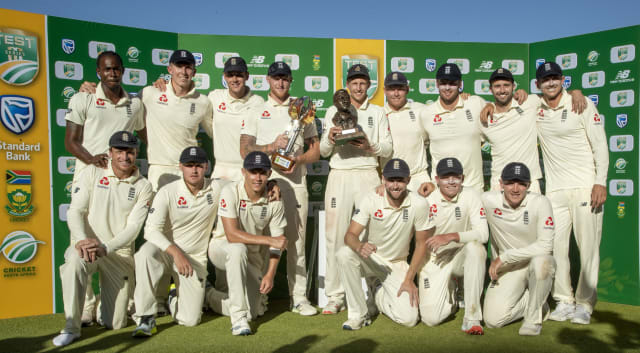 England ended their triumphant Test tour of South Africa on a rousing high, wrapping up a 191-run win at the Wanderers to clinch the series 3-1.

Having backed the hosts into a corner over the first three days – 465 runs behind and with six entire sessions in front of them – England finished the job by dismissing them for 274.

The Proteas showed some fight, notably in the form of Rassie van der Dussen’s 98, but England’s pace attack was too strong, Mark Wood taking four more wickets for a match haul of nine for 100.

Ben Stokes was also key, breaking open the two biggest stands of the day by dismissing Dean Elgar at the end of the morning session and captain Faf du Plessis just before tea. Du Plessis was earlier seen nudging Jos Buttler with his shoulder and could find the pain of defeat exacerbated by disciplinary action.

Three is the magic number

England have only won three in a row overseas on three occasions since Mike Brearley’s successful Ashes campaign in 1979. Joe Root has been captain for two of those, having overseen the whitewash in Sri Lanka in 2018. Root has his critics as a leader but it is pertinent to note that neither of English cricket’s most recent knights of the realm, Andrew Strauss or Alastair Cook, managed it.

Vernon Philander did not have an enjoyable final Test match, tearing his hamstring after just nine balls of the second innings. But his contribution to the game was well recognised. England captain Root made a point of shaking his hand as he was dismissed for the last time, the big screen at the Wanderers flashed a tribute to him and a pocket of England fans called him over after the presentation to congratulate him for his efforts. Next stop, Somerset.

There are several signs dotted around the Wanderers hailing it as the home of “the greatest one-day international cricket match of all time”. They refer, of course, to the unforgettable day in 2006 when South Africa launched a world-record chase, making 438 for nine in response to Australia’s 434 for four. Last year’s World Cup final was lower scoring but the nerve-shredding tension of England and New Zealand tying on 241 then needing a boundary count-back after being inseparable in the format’s first ever super over makes it a viable contender. Maybe they should ship the signs to Lord’s?

A brief hiatus before a three-match one-day series between two squads weakened by rest and rotation. After that both sides should be back to full strength for the concluding T20 series.