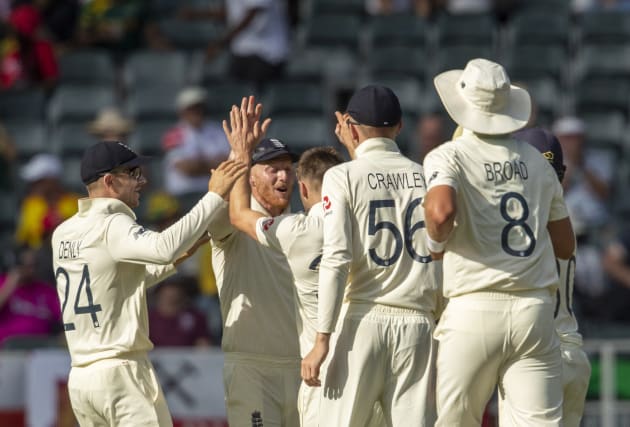 England made big strides towards a series victory over South Africa after two vital wickets late on the fourth afternoon of the final Test.

The Proteas were still 277 behind on 188 for four at tea, Rassie van der Dussen and Faf du Plessis falling in the space of five balls after a defiant 92-run stand in Johannesburg.

It was all-rounder Ben Stokes who broke the game open, clean bowling home captain Du Plessis for 35 deep into the second session having also removed opener Dean Elgar at the end of the morning’s play.

Van der Dussen then fell for 98, lifting Mark Wood to short cover while in touching distance of a maiden Test century.

Pieter Malan (22) and Elgar (24) set the right tone for their side, blunting the new ball as they made 39 in the first hour, but Chris Woakes struck immediately after the drinks break as Malan perished with a loose drive.

Woakes had Van der Dussen given lbw for a duck four balls later but the batsman successfully overturned the verdict of DRS and went on to add a solid stand of 50 with Elgar.

The latter was visibly attempting to dig in for a long stay but Van der Dussen, having avoided the ignominy of a pair when he pulled Woakes for four, took a more dashing approach. When faced with the occasional off-spin of Joe Root he cut loose, striking four boundaries and a big six as the England skipper leaked 23 from three overs.

It took an interjection from Stokes in his last over before lunch to break the pair up, digging a short ball in at Elgar’s helmet and gathering the return catch as he flailed in self-defence.

Van der Dussen and Du Plessis occupied the crease for the next two hours and 20 minutes, putting plenty of hard labour into the English attack.

Du Plessis had a sticky start, beaten on a couple of occasions before getting off the mark from his 18th ball, but Van der Dussen progressed safely to his third half-century of the series.

England cycled through their options in vain – Woakes rapping Du Plessis on the gloves as he targeted a crack outside off stump and Sam Curran seeing an outside edge zip for four as he slanted the ball across him.

Another stint of part-time spin proved unsuccessful, Joe Denly taken for 19 in his three overs, but Du Plessis almost flattened his own stumps after being forced back by a fierce Wood bouncer.

Things began to get ill-tempered in the middle, Du Plessis hit on the pads by a throw from the infield and then appearing to make contact with Jos Buttler as they passed each other.

Yet the only blow that really counted was the one inflicted by Stokes, who charged in again and bowled Du Plessis with a delivery that kept low and skimmed off the toe of the bat.

After repelling England for so long the spell was broken when Van der Dussen departed in the next over.

He had batted brilliantly and deserved his side’s first ton of the series, but when Wood attacked from round the wicket he lobbed a catch to the diving Stuart Broad at short cover.

That left Temba Bavuma and Quinton de Kock at the crease, with England’s belief wholly restored.