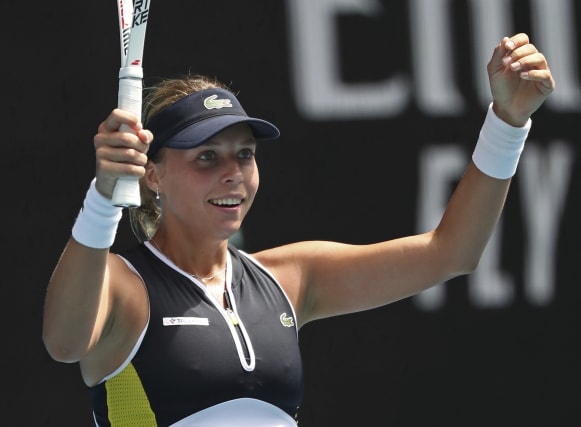 Nigel Sears joked he will not be seeking advice from son-in-law Andy Murray if his charge, Anett Kontaveit, makes it to the Australian Open final.

Estonian Kontaveit reached the quarter-finals of a grand slam for the first time with a tense 6-7 (4) 7-5 7-5 victory over 18-year-old Pole Iga Swiatek.

Sears is the father of Murray’s wife Kim, and the former world number one has been following Kontaveit’s progress.

Sears said: “I have been in touch with him, because my wife spends quite a lot of time at their place helping with the grandkids, and had a chat with him. You can get a rye sense of humour there. I might have a couple more chats if she goes much deeper.”

Murray famously has never won the Australian Open despite reaching the final five times, and Sears quipped: “I might ask him, tell us exactly what not to do if she makes the final.”

That remains a long shot but it is impressive that Kontaveit has made it this far having been forced to cut short her season at the US Open last year after been hospitalised with an abscess.

Kontaveit had to undergo surgery and was unable to train for several months.

The 24-year-old said: “It was a really tough time, really tough couple of months after that. But I’m so happy I’m through that now. I started training in mid-November. It’s been only uphill from there.”

Having thumped sixth seed Belinda Bencic in the third round for the loss of only one game, the contest against Swiatek was a very different occasion.

Kontaveit led 5-1 in the final set before losing four games in a row but she hung tough to get over the line.

“It wasn’t the easiest to watch,” said Sears. “A bit of an emotional roller-coaster. Certainly put me through the ringer today. I’m really delighted she won it.”

Kontaveit will be the underdog again in the next round when she takes on Wimbledon champion Simona Halep, who is yet to drop a set and was impressive in a 6-4 6-4 victory over Elise Mertens.

But, with the open nature of women’s tennis, Sears believes Kontaveit can go all the way.

“I certainly don’t think it’s impossible at all but, at the same time, it’s just one match at a time,” he said.

“Not looking any further ahead than that other than the fact it’s wide open. I think if you were going to win seven matches in a row, you’ve got to be really together, really focused, really disciplined all the way through. But it’s certainly exciting that she’s in the frame.”

Former French Open and Wimbledon champion Garbine Muguruza is unseeded here having dropped out of the top 30 but is always a dangerous opponent and she saw off ninth seed Kiki Bertens 6-3 6-3.

Muguruza, who had already beaten fifth seed Elina Svitolina, is through to only her second slam quarter-final since triumphing at the All England Club in 2017.

She admitted she has thought about completing the set of slam titles, saying: “I feel like every player has this desire. If you can achieve it, to be able to win the whole four, it’s incredible.

“I don’t think about it all the time, but I do feel like, ‘OK, I don’t have 20 more Australian Opens to play’. Every time I come here, I’m super concentrated.”