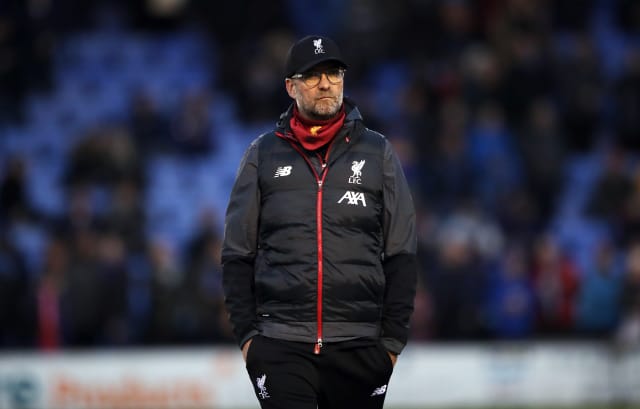 The Football Association says Liverpool and other Premier League clubs were warned that FA Cup fourth-round replays would fall during the mid-season break, and says it “went to great lengths” to ensure a break could happen at all.

Reds manager Jurgen Klopp has said that neither he nor his first-team stars will be present for their replay at home to Shrewsbury, which is set to take place on February 4 and would therefore mean the club only having 10 football-free days during the rest period.

He said his club wanted to “respect” the mid-season break, and the intention is that under-23s boss Neil Critchley will take charge of a youthful Reds side for the replay.

Klopp said on Sunday: “The Premier League asked us to respect the winter break. That’s what we do. If the FA doesn’t respect that, then we cannot change it. We will not be there.”

The FA defended its position in a statement issued on Monday afternoon, citing the fact that it had made concessions over the fifth round in order to fit a break in.

Fifth-round ties will now be played in midweek in March, and there will be no replays from that stage onwards.

“The FA went to great lengths to create an annual mid-season player break, working closely with the Premier League and its clubs,” an FA statement read.

“It is a new and significant addition to the English football calendar and is designed to benefit clubs and their players.

“To accommodate the annual mid-season player break, the FA rescheduled the fifth round to midweek and removed fifth-round replays from the calendar. This allowed the Premier League room in its calendar to have a split round of fixtures over two weekends.

“Prior to the start of the 2019-20 season, all clubs accepted that FA Cup fourth-round replays, where required, would have to take place during the first week of the mid-season player break.

“This will only affect a small number of clubs due to the split of Premier League fixtures in the mid-season player break.”

The other clubs so far affected by this are Newcastle, Southampton and Tottenham, who all face fourth-round replays.

The FA is understood to have no plans to scrap fourth-round replays despite calls, especially from the likes of Klopp and Manchester City boss Pep Guardiola, to do so.

It feels it has to represent the interests of clubs all the way down the pyramid. FA Cup runs can have a transformative financial effect on clubs, with Lincoln attributing some of their investment in training facilities to revenue earned from success in the competition.

Accrington chief executive Andy Holt criticised Liverpool on Twitter, saying: “This is a battle @FA must win or their flagship competition is totally undermined. @LFC need censuring and fining heavily. It’s not their football.”

It is understood Klopp’s stance has the backing of the club’s owners, while former Reds defender Jamie Carragher – now a pundit – also spoke out in the German’s defence.

“Senior players having a winter break is right, you can’t implement one and then have a replay in the break. That’s the same for all PL clubs,” Carragher wrote on Twitter.

“But Klopp should take the team, his young players will be delighted and the picture of him in Ibiza with a (beer) will be on every front page!”

The club have already been forced to make a similar decision in regard to the Carabao Cup earlier this season, when a side led by Critchley played against Aston Villa while the first team competed in the Club World Cup in Qatar last month.