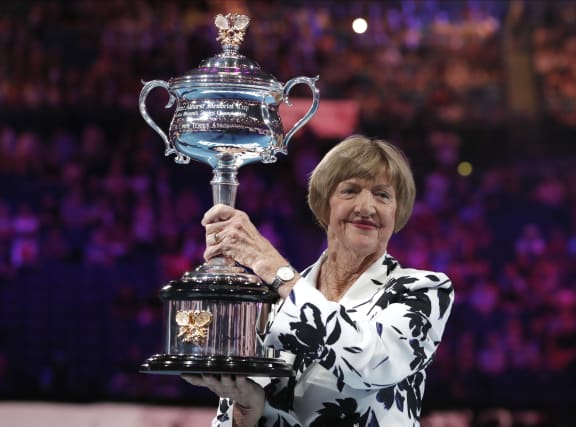 Margaret Court received a muted reception as she was presented with a replica trophy at the Australian Open to make the 50th anniversary of her calendar Grand Slam.

Court’s outspoken and controversial views on LGBTIQ issues have made her tennis’ most polarising figure, and tournament organisers were put in a difficult position over how to mark the occasion.

Tennis Australia put out a statement ahead of the event saying they would recognise Court’s achievements, including a record 24 grand slam singles titles, while reiterating that her views were not compatible with the organisation’s ethos.

The most public event to mark the occasion was a presentation made to Court by Rod Laver, who received star treatment last year on the 50th anniversary of his Grand Slam, on the arena that bears his name ahead of the fourth-round clash between Nick Kyrgios and Rafael Nadal.

Organisers would have breathed a sigh of relief as Court’s presence was met with polite, if hardly enthusiastic applause, and a smattering of whistles.

A handful of rainbow flags were held up around the arena but that was as far as any protest went.

John McEnroe did not mince his words about Court speaking on Eurosport, describing her as Australian tennis’ “crazy aunt”, and saying the only thing longer than her list of tennis achievements was “her list of offensive and homophobic statements”.

Serena Williams’ third-round loss to Wang Qiang means she is still one slam title behind Court, and McEnroe added: “Serena, do me a favour, get two more grand slams this year and get to 25 so we can leave Margaret Court and her offensive views in the past, where they both belong.”