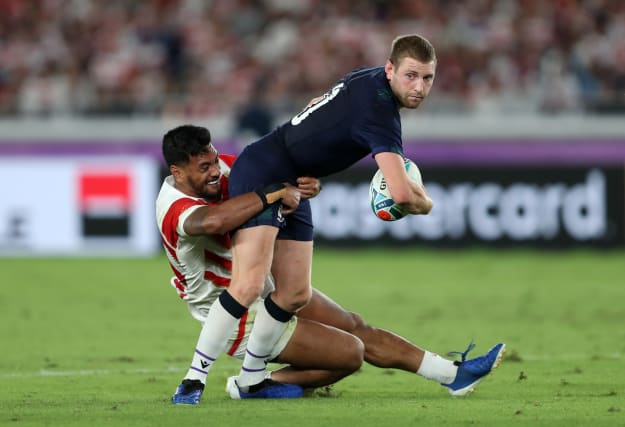 Scotland head coach Gregor Townsend has revealed the door is not closed on Finn Russell returning during the Guinness Six Nations, but warned the fly-half must show he is a team player.

The 27-year-old was disciplined for a breach of team protocol following an incident at the team hotel on January 19 when he was involved in a late-night drinking session.

Russell turned down an offer to stay in camp and help Scotland prepare for Saturday’s opener at the Aviva Stadium against Ireland, instead playing for his club Racing 92 last weekend.

It was a decision which led to speculation he may not feature at all in the tournament, but that could change.

“The door is open for any player,” Townsend said. “Obviously he is unavailable not because of injury, he is not available because of what went on and there has got to be a link to where he would be in terms of is he with the team?

“Is he able to live up to the standards expected of a team player and a Scotland team player, but the focus is so much on us preparing for Ireland that these are questions for a later time.”

Townsend confirmed he held a “positive” meeting with Russell on Monday night, but the pair have not been in contact since Thursday when the 49-cap international left the Scotland camp.

He added: “I had a long meeting with Finn on Monday to discuss all manner of things.

“First of all obviously the consequences of his actions, of leaving camp on Sunday night and not being there on Monday, but it was a positive meeting.

“We left that meeting in a really good place and at the time I thought he would be back in camp later that week. It didn’t happen and we have moved on.

“In terms of where we are now as a team, because we have to prepare for Ireland, that is our focus and we will see after the Ireland game what happens.”

On the incident, Townsend said: “Finn was drinking and a couple of players said to him ‘stop drinking’.

“When I saw him around quarter to 12, he decided to leave and his parents picked him up and he left after a five minute conversation with me and we didn’t see him until the following evening.”

After a difficult World Cup, Scotland’s preparation for the Six Nations has not been smooth with wing Darcy Graham also suffering a knee injury after Russell’s disciplinary breach.

Hooker Fraser Brown described the mood in camp as excellent and said: “Most of the players were aware by Monday.

“It is one of those situations where as a group of players we have certainly not performed well on the pitch over the last couple of years so all we wanted to do was have a set of standards where we all pull in the same direction.

“The idea is everyone in this squad buys into that. It was unfortunate what happened on Sunday, but we just want a group of guys that are all here pulling in the same direction and wanting to achieve on and off the pitch together.”

Russell’s absence has led to many writing off Scotland’s chances of causing an upset away to Ireland on Saturday.

But Brown hit back at that talk and discussed the likely replacement for the Racing 92 fly-half in Glasgow team-mate Adam Hastings.

He added: “I think that is a bit disingenuous to the other players in our squad.

“You can’t get away from the fact Finn is a quality rugby player, but Gregor spoke earlier about the form of Adam and I think he has been fantastic at Glasgow.

“Playing with him week in, week out I have been lucky enough to see the development in his game and not just in the last month, but from last season. I think he is playing so well.

“We have still got plenty of quality operators in our squad and the focus for us from last week up to this Saturday is how we put the best team on the park and how we can produce our best rugby.”