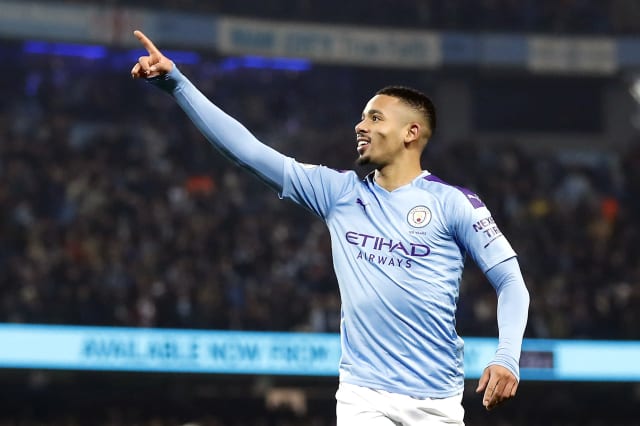 Gabriel Jesus has revealed the motivation for Sunday’s double against Fulham came from last week’s missed penalty at Sheffield United.

City laboured to victory in their Premier League clash at Bramall Lane last Tuesday, with substitute Sergio Aguero scoring a later winner after Jesus missed from the spot.

The Brazilian put that behind him with two headers in the space of three second-half minutes in City’s comfortable 4-0 defeat of Fulham in the FA Cup fourth round.

Jesus said: “I’m happy with the goals. I always have to score when I go to the pitch.

“When I miss a chance I’m very hungry to score. Here I scored and helped my team-mates.

“It’s the FA Cup, it’s a very good competition. We qualified for the next round, so I’m happy.”

It was noticeable, however, was that it was Ilkay Gundogan – not Jesus – who took the early penalty that set City on their way at the Etihad Stadium.

Fulham captain Tim Ream was sent off with just six minutes gone after hauling down Jesus in front of goal.

The German comfortably tucked away his spot-kick before Bernardo Silva doubled City’s lead with a fine long-range effort.

Jesus, who also missed a penalty against Atalanta at the San Siro in November, said: “In the training sessions I take them and I score more than I miss. If I take five I miss one and sometimes I don’t miss.

“In games it’s been different. I’ve taken three this season – two here and one with the national team Brazil – and I missed all three.

“When you miss three in a row you go to the next one under pressure to score. So that’s the challenge. I have in my mind that I have to train more and improve more, of course.

“Normally the manager puts on the paper in the dressing room before the game who are the penalty takers. Last game I was the penalty taker and here normally I am the taker but it was Gundo.

“That’s football. Sometimes you have to stop, improve and come back strong.”

City may be out of the running for a third successive title, but they are not surrendering either of the other two domestic trophies they won last season without a fight.

Now safely through to the fifth round of the FA Cup, they can turn attention to the second leg of their Carabao Cup semi-final against Manchester United on Wednesday. They hold a 3-1 aggregate lead from the first leg.