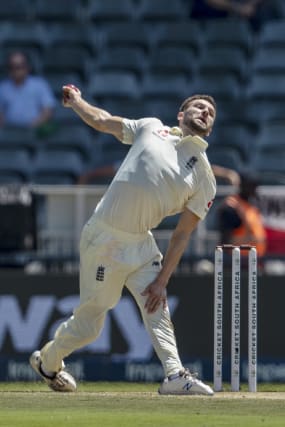 Mark Wood finished with five for 46 as England dismissed South Africa for 183 on the third morning in Johannesburg, strengthening their grip on a series-clinching victory in the fourth Test.

England took lunch at the Wanderers with a formidable first-innings lead of 217, enough to enforce the follow-on for the second game in a row, although Joe Root may decide to bat again and allow his seamers a well-earned rest.

Wood would deserve one, having claimed his second five-for in Test cricket, both in his last three appearances. Resuming with three of the top six already in the bag, he cleaned up top-scorer Quinton De Kock for 76 then had last man Dane Paterson caught behind.

De Kock had earlier shared a stand of 79 with Dwaine Pretorius to give the South African cause a semblance of resistance, but England’s bowlers were once again too good to be kept out.

South Africa began the day on 88 for six and lost another to the fifth ball of the day, Chris Woakes earning a thick leading edge from Vernon Philander and watching as the ball looped gently to Stuart Broad at mid-off.

De Kock and Pretorius frustrated England for over an hour-and-a-half, the former turning his existing 32 not out into a fourth half-century of the series. Pretorius also did well, driving cleanly to take advantage of Root’s attacking fields and reaching a new personal best of 37.

It took the introduction of Ben Stokes to end his stay, feeding a rising delivery to Zak Crawley at gully before Wood wrapped things up at the other end. De Kock was beaten on the drive, with a touch of sideways movement enough to slip between bat and pad and flick the bails.

If Wood was too much for De Kock, then number 11 Paterson had no chance, stepping away to leg and nicking off to Jos Butter.

Gareth Davies and Ross Moriarty start for Wales against France