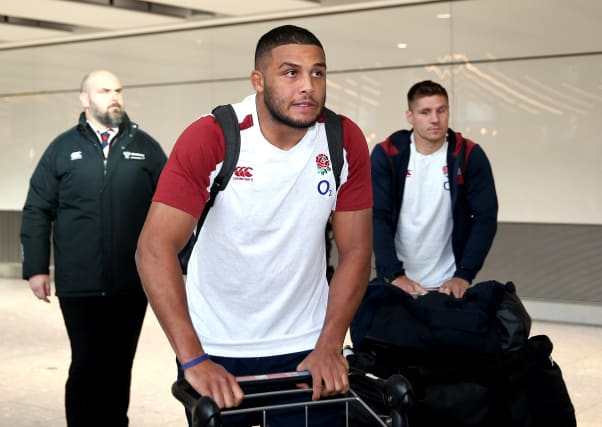 Lewis Ludlam has finally unpacked the World Cup kitbag that has been festering on his living room floor now that he knows his England career is to be continued.

Eddie Jones’ back-row bolter for Japan 2019 is in contention to start the Guinness Six Nations opener against France on Sunday after the broken arm sustained by Billy Vunipola created a vacancy at number eight.

Upon returning from Asia where he made four appearances including a start against the USA, the 24-year-old resolved not to move his kitbag from its new home until he was picked again.

“Just seeing my bag in the living room was always a little reminder of what I wanted to achieve,” said Ludlam, who features in the 34-man training squad preparing for the Six Nations at England’s Portugal training base.

“It was a bit musty, but luckily they clean your kit as soon as you get out here so it was all straight in the wash bag and ready to go.

“When I was named in the squad I checked what was in the bag, packed it and put it into the car. It was a moment because I had all my World Cup shirts in there and my medal was in there as well.

“To open the bag up reminded me of where I had come from to get to the World Cup. It also said I’m going again and that’s been a boost for my confidence.

“I wanted the kitbag in my living room to be a reminder when I wake up in the morning, when I go to training and when I come back in the evening that all my choices are geared towards playing for England.

“It was my idea, it came from me. The coaches told me I had a choice through preparation and through learning on and off the field whether I wanted to be a player who made a few appearances at one World Cup or one who really wanted to push on.

“To have that constant reminder there helped to steer me in the right direction again.

“Now I’m here it’s about pushing on and hopefully playing a little bit more than I did at the World Cup.”

Alongside Tom Curry and Ben Earl, Ludlam is one of three options to replace Vunipola in the back row despite being viewed primarily by England and his club Northampton as a flanker.

He made a replacement appearance at number eight against Argentina at the World Cup but his experience in the position has been limited.

“I’ve always loved doing the carrying. I was really gutted to see Bill pick up an injury at an unfortunate time,” Ludlam said.

“Eddie knows best and if he’s got plans to play me at eight then I’m happy to play wherever. Growing up I played at eight from Under-14s and a little bit for the Wanderers at Northampton.

“We’ve been quite fortunate at Saints with good number eights like Teimana Harrison and Louis Picamoles.

“I probably haven’t played as much eight as I’d have liked to, but I’ve got a little bit of experience there when Teimana’s needed a rest. I’m happy at eight and enjoy playing there.

“(Forwards coach) Matt Proudfoot said to me that he doesn’t want me to be a Billy Vunipola or a Sam Underhill or a Tom Curry, he just wants me to be myself.

“That’s encouraging because it gives you the confidence to play your natural game and not try to do anything too differently to what you usually do.

“To hear that from a coach – ‘go be a better version of yourself’ – is a really encouraging thing.”