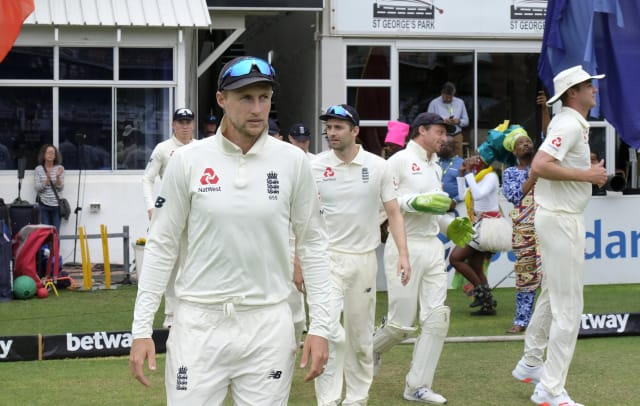 England head to the Wanderers on Monday needing 10 South African wickets to convert a lead of 465 into a memorable series win.

Captain Joe Root declined to enforce the follow-on after establishing a 217-run first-innings lead, top-scoring with 58 as his side added another 248 to their opponents’ nominal chase.

There are two full days left to settle matters but the momentum is firmly with the tourists, who will be hoping the combination of scoreboard pressure and a well-rested pace attack help bring about an early finish and a 3-1 triumph in the Basil D’Oliveira Trophy.

Mark Wood will be looking to take a starring role again after completing figures of five for 46 on the third morning, while England have four other seamers queuing up to play their part.

Wood’s bowling average for his eight wickets in the last three innings.

Billy Cooper, the Barmy Army’s trumpet player for the past 16 years, is hanging up his horn after this match. His musical bursts have accompanied many of England’s best on-field moments in that time and provided the backing for many a favourite chant in the stands. Joe Root showed the team’s appreciation by delivering a signed shirt during the lunch interval in recognition of Cooper’s efforts

South Africa’s fans already know Vernon Philander is retiring at the end of the match, and the veteran will do so having torn his hamstring in his last innings as a bowler. But speculation is also rife that captain Faf du Plessis is also ready to call time on his red-ball career. He has one more knock before finalising any such decision and will be desperate to make it a good one, regardless of his future plans.

Jos Buttler is coming under increasing pressure for his place as England’s wicketkeeper batsman, with Jonny Bairstow and Ben Foakes snapping at his heels. He averages a paltry 16.42 in the series but assistant coach Paul Collingwood spoke up for him after his latest failure. “We know what a world-class player he is. Players like that you’ve got to back to the hilt, simple as that,” he said.

De Kock at the double

When Quinton De Kock held on to an edge from Ollie Pope he brought up his 200th dismissal as a Test wicketkeeper – 189 catches and 11 stumpings. He became the 18th player to reach the landmark but remains a long way behind the world record-holder. His current head coach Mark Boucher completed a staggering 555 in his playing days.