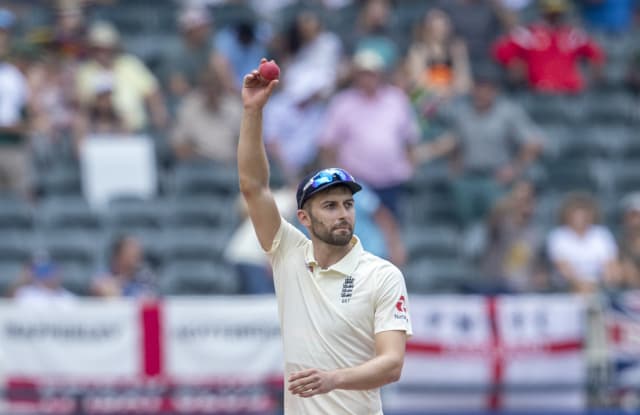 England declined to enforce the follow-on on day three of the decisive fourth Test against South Africa, batting again to push their advantage to 303 in the series decider in Johannesburg.

The Proteas were dismissed for 183 in response to England’s first-innings 400, Mark Wood taking the last two wickets to finish with five for 46, leaving the tourists 217 ahead.

Joe Root could have asked them to go straight back in but opted to give his pacemen a well-earned rest having taken up the follow-on option in Port Elizabeth last week.

South Africa began the day on 88 for six and lost another to the fifth ball of the day, Vernon Philander attempting to turn Chris Woakes to leg and sending a thick leading edge to Stuart Broad at mid-off.

Quinton De Kock and Dwaine Pretorius proceeded to cool England’s charge, partnering up for over 90 minutes as they added 79 to a previously-paltry total.

De Kock turned his existing 32 into a fourth half-century of the series and Pretorius took advantage of some attacking fields to drive his way to a new personal best of 37.

Ben Stokes broke things up, Pretorius feeding his rising delivery to Zak Crawley at gully, before Wood wrapped things up. He beat De Kock on the drive, marrying outright pace with deviation off the pitch to zip through the gate and flick the bails.

If Wood was too much for De Kock, then number 11 Dane Paterson had no chance, stepping away to leg and nicking off to Jos Butter. That earned the Durham quick a second five-wicket haul in Tests, both in his last three appearances.

Root had the lunch break to ponder his options but was never likely to put the burden straight back on his bowling unit. Instead he had Crawley and Sibley strapping on the pads and the rookie openers settled into stand of 56.

Philander, making final Test appearance, limped out of the attack with a hamstring strain midway through his second over and was then fined 15 per cent of his last match fee for sending off Buttler the day before.

All in all it looked a sorry way for the veteran seamer to bow out from the big stage.

England were not throwing themselves into aggressive strokes, with no time pressure to do so, and instead were focusing on stretching the advantage methodically.

Sibley had a few moments of fortune as he benefited from thick edges to the third man boundary but offered no concrete chances.

Crawley was first out for 24, nicking Pretorius behind, and Joe Denly played Paterson into his stumps for just eight after deflections off bat and pad.

England’s lead was big enough to sweep aside such minor setbacks, but Denly’s personal aspirations may be hampered by another unconvincing effort.