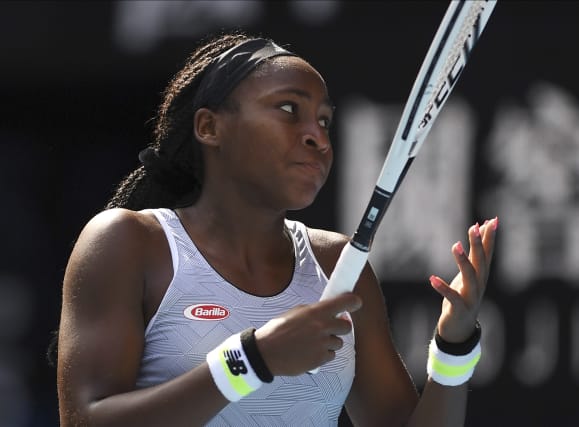 Coco Gauff will leave Australia believing more than ever that she belongs on the big stage after her fine run at Melbourne Park ended with a fourth-round loss to fellow American Sofia Kenin.

The 15-year-old was bidding to become the youngest player to reach a grand slam quarter-final for 15 years, and she was one set away when she took the opener on a packed Melbourne Arena.

Gauff’s victory over defending champion Naomi Osaka was on paper certainly the best of her fledgling career but, so poor had the Japanese been, it was difficult to gauge how well the teenager had actually played.

Kenin, a rising star herself at 21, made Gauff play a lot more balls and solve different problems and, if she can maintain the level she showed in the first set, then it is clear the teenager will soon be challenging for the biggest titles.

Gauff said: “The thing I’m most proud of is how I handled it on the court. Even though today I lost a set 6-0, I was still believing I could win it.

“I don’t think I showed any negative emotion too much in the match. I just tried my best.

“I guess what surprised me is how calm I was going into all these matches. I wasn’t really nervous. I’m happy that I’m not letting the moment seem too big than what it is.”

Gauff has clearly improved a lot since making the fourth round of Wimbledon and the third round of the US Open, with her serve, backhand and athleticism already among the best.

“My short-term goal is to improve,” she said. “I’m doing well right now at 15. I still have so much I feel like I can get better on. Even my parents, my team, they all believe I can get better. I don’t even think this is close to a peak for me.”

Gauff recovered from 4-2 down to take the opening set on a tie-break but three double faults in the fourth game of the second helped Kenin to break and from there the momentum was always with the 21-year-old.

Gauff was in tears at the end, but she said: “I had a lot of fun. The crowd was really rooting for me. I had a great tournament. I was disappointed that I lost obviously. I think naturally when I lose, I’m just a bit emotional.”

Under WTA rules, she can only play one more tournament before she turns 16 in March, which will be the BNP Paribas Open in Indian Wells.

Kenin’s climb up the ranking has come without the attention of Gauff’s and she will play in the last eight of a grand slam for the first time.

There were tears for her, too, and she said: “I was just so happy to have won. It was a tough match. I knew she’s playing well.

“I was just really happy with the way that I was able to handle my emotions and just fight through every point. Of course she has a lot of hype. She has a big name. I just tried not to let that get the better of me.”

Kenin defeated Serena Williams at the French Open last year and is on the verge of the top 10 but so far has been somewhat under the radar.

That could change this week and Kenin said: “I want to show who I am, show my best tennis, show why I’m there, why I belong. I’m doing that.”

Kenin will next face Tunisia’s Ons Jabeur, who continued her best slam run by beating Williams’ conqueror Wang Qiang 7-6 (4) 6-1 to become the first Arab woman to reach the quarter-finals of a slam.

The 25-year-old, who is ranked 78, has beaten Johanna Konta, Caroline Garcia, Caroline Wozniacki in the Dane’s final match and now Wang.