Arteta insists Mustafi can eliminate errors and improve as a defender 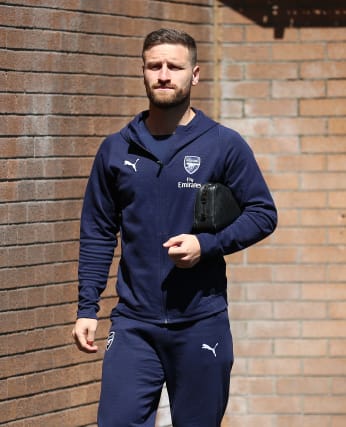 Mikel Arteta believes he can help Arsenal defender Shkodran Mustafi improve and cut out his lapses in concentration.

The German’s mistake at Stamford Bridge on Tuesday led to team-mate David Luiz receiving his marching orders early on during the 2-2 draw with Chelsea.

While Mustafi reacted positively, it highlighted why he has been a source of frustration for Arsenal fans who have grown tired of his frequent errors since signing for the club in 2016 for a reported £35million.

Under Unai Emery, the former Valencia centre-back was surplus to requirements and made available for transfer but the new Gunners head coach has thrown him a lifeline and injuries and suspension mean he will start in the FA Cup at Bournemouth on Monday.

“I don’t believe that at 27 you cannot improve certain aspects of the game, I really believe you can,” Arteta said.

“What I’m not going to accept is somebody makes a mistake and after he stops playing, and he doesn’t want the ball and doesn’t want to make decisions. That player is not acceptable for our team.

“But Musti after that (mistake), he tried to play every single time, he went for every single challenge and put his body on the line. He was down afterwards but he reacted and if he does that, he will overcome the situation.

“I ask him to play the way we want to play. He makes mistake, another day it will be someone else. Obviously we want to minimise that as quick as possible and find the reason why that happens, but I like his reaction after that.”

Former Manchester City assistant Arteta suggested there are certain patterns which lead to the scenario where a player like Mustafi makes a mistake.

He wants to try and take that away and hinted the one-time Everton defender could remain at the club for many years if he can cut out the errors.

“When he is my player and when he is training with me the way he does every day, of course,” Arteta responded when asked if Mustafi has a long-term future at Arsenal.

“The plans maybe in the summer were different with him. I came here, he is here and his attitude is always right and he wants to help.

“Yes he made a mistake, but it’s OK. I like more the reaction and I look more at the reaction.”

Sokratis Papastathopoulos is set to return for Arsenal at Bournemouth after a bout of illness and partner Mustafi at the heart of defence.

If the Greek international is not fit enough to start, it would open the door for Rob Holding to play at centre-back.

He suffered anterior cruciate ligament damage in December 2018 and has failed to get back to the type of form he displayed before his injury.

But Arteta insisted: “He is a very interesting player, very focused, very determined and willing to learn.

“Obviously the fact he was out for such a long time, he is lacking competition and lacking that rhythm that we need to try and give him as much as possible to help him.

“I agree there were some moments after that where he looked really, really good and he is a player that will be very valuable for us.”

Arteta conceded due to Arsenal’s injuries at the back, with Calum Chambers (knee) and Kieran Tierney (shoulder) out, he cannot allow Holding to depart on loan.

He added: “Sometimes the context is not idea for individual players needs. In this moment obviously we are very short in that position and we can’t do that.”