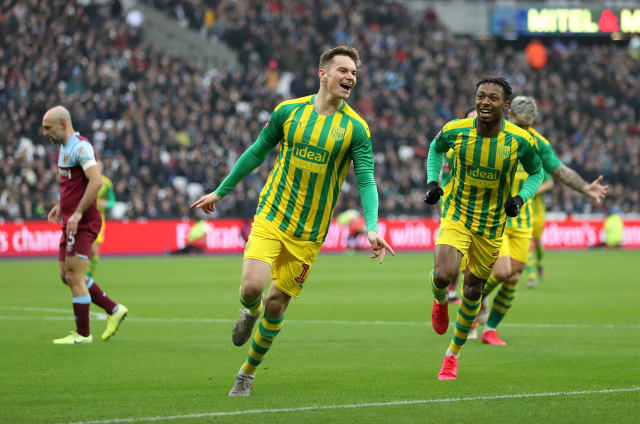 Slaven Bilic dumped his former club out of the FA Cup as West Brom sank woeful West Ham 1-0 at the London Stadium.

Bilic, sacked by the Hammers in 2017, came back to haunt them, with his Championship pace-setters running out deserved winners thanks to Conor Townsend’s early strike.

Gallingly for West Ham, this was pretty much their strongest available line-up while Bilic made eight changes to his, with the Croatian’s priority lying with the promotion race.

Not only that, but Albion also played the final 18 minutes with 10 men after Semi Ajayi was sent off for a second booking.

Among those drafted in by Bilic were experienced campaigners Charlie Austin, Chris Brunt and Gareth Barry, an FA Cup winner nine years ago with Manchester City.

Barry and Brunt may have a combined age of 73 but they were more mobile than anyone in the West Ham’s plodding midfield.

The rest of the Baggies side had pace, tempo, intensity and a clear game plan, all of which were lacking from the Premier League side.

Their goal arrived in the ninth minute after a carefree 40-yard run from Filip Krovinovic led to a mix-up between Issa Diop and Carlos Sanchez and saw the ball fall at the feet of Townsend.

The full-back still had plenty to do on the edge of the box, but he took a touch before pinging his shot across Darren Randolph into the far corner for his first Albion goal.

They should have had more during an embarrassingly one-sided first half, but Krovinovic glanced a header narrowly wide before Austin planted a free header the wrong side of the post.

Hammers boss David Moyes made a triple substitution at half-time, with the calamitous Sanchez making way for captain Mark Noble, while so bad was defender Fabian Balbuena that the injured Angelo Ogbonna went on in his place.

Michail Antonio was also summoned to add some zip to the attack, but when his first break up field fashioned a chance for Albian Ajeti, the Swiss striker’s touch let him down.

Sebastien Haller, West Ham’s £45million record signing who looks like he would rather be anywhere else right now, shanked his one attempt on goal off target while Manuel Lanzini fired wide and Pablo Zabaleta headed over.

Noble should have equalised in stoppage time but blazed over from 12 yards before burying his head in his hands.

A draw would have flattered the Hammers, though, and they ultimately bowed out with a whimper and were roundly booed off at full-time.

They now have only a relegation battle to look forward to, and if these two sides swap divisions in May, Bilic really will have had the last laugh.