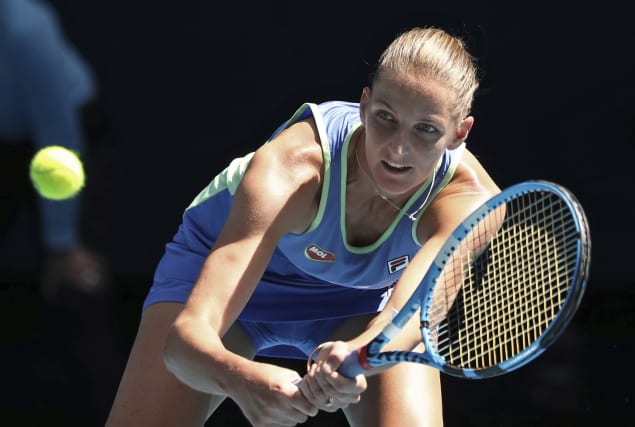 The upsets continued at the Australian Open on Saturday as second seeded Czech Karolina Pliskova joined Serena Williams and Naomi Osaka in exiting the tournament in the third round.

Pliskova had won all six of her previous meetings with Anastasia Pavlyuchenkova but it was the Russian who came out on top of a very tight two-setter, winning 7-6 (4) 7-6 (3) after two hours and 25 minutes.

Pliskova had two set points at 6-5 in the second set but Pavlyuchenkova saved both and progressed to the fourth round in Melbourne for the third time in four years.

Now 28, Pavlyuchenkova is still trying to live up to the stellar predictions made of her as a junior after she won the girls’ singles title here in 2006 at the age of 14.

Her opponent in that final was Caroline Wozniacki, so the Dane’s retirement on Friday had particular resonance.

“I still see my picture and it’s a strange feeling,” said Pavlyuchenkova. “I still remember, it was a special moment, but it makes me feel, ‘Damn, how old am I?’

“And beating Caroline in the final, and she retired yesterday. Everybody has their own story and their own way I guess.

“I still have energy, ambitions, motivation, I’m hungry, I want to achieve bigger things. It’s a marathon and I started my marathon really, really slow and maybe she sprinted right away.”

Pliskova was not happy at all with her performance, saying: “I think she was playing very well today. But let’s say I was about 40 per cent today of my game, so of course then she can feel so much better if I just don’t play enough what I can play.”

This seemed another big chance for the Czech, arguably the best player on the WTA Tour over the past three or four years, to win a first grand slam title.

Pliskova said: “I can play good one match but not really four, five in a row so far. Of course it’s more pressure here so I think everybody can feel it. I think it’s just about handling these things and to move on. And there is going to be more tries, so let’s see if I can do better.”

Pavlyuchenkova, who has never been beyond the quarter-finals at a slam, will next face Angelique Kerber after the 17th seed defeated Camila Giorgi 6-2 6-7 (4) 6-3.

Kerber, who won the first of her three slam titles here in 2016, is the only former champion left in the women’s draw.

Fourth seed Simona Halep, the beaten finalist two years ago, was impressive in a 6-1 6-4 victory over Yulia Putintseva but another top-10 player was sent packing, sixth seed Belinda Bencic winning just one game in a 6-0 6-1 defeat by Anett Kontaveit.

Iga Swiatek joined Coco Gauff as teenagers through to the fourth round, the 18-year-old Pole beating 19th seed Donna Vekic 7-5 6-3.