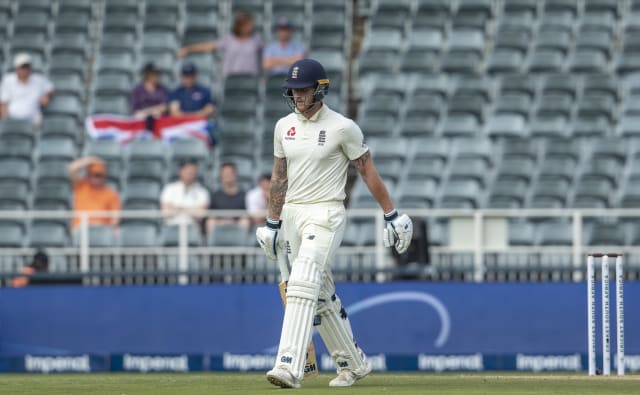 Ben Stokes has been fined 15 per cent of his match fee and handed one demerit point for his angry outburst at a fan during England’s fourth Test against South Africa.

Stokes was walking off the field after being dismissed for two on the first evening at the Wanderers in Johannesburg, when he became enraged at what he later described as “repeated abuse from the crowd”.

He launched into a foul-mouthed response as he approached the distinctive players’ tunnel, with his comments captured by the host network’s cameras and relayed via Sky Sports in the UK.

Stokes went on to issue an apology for his “unprofessional” actions and accepted a charge from match referee Andy Pycroft, who activated article 2.3 of the International Cricket Council’s disciplinary code.

That covers “the use of words commonly known and understood to be offensive, obscene and/or profane and which can be heard by the spectators and/or the viewing public” – the same charge and the same punishment handed to Jos Buttler after he swore at Vernon Philander during the Cape Town Test.

An ICC statement read:  “England all-rounder Ben Stokes has been fined 15 per cent of his match fee for breaching Level 1 of the ICC Code of Conduct during the opening day of the fourth Test against South Africa at the Wanderers.

“Stokes was found to have breached Article 2.3 of the ICC Code of Conduct for Players and Player Support Personnel, which relates to “use of an audible obscenity during an International Match.

“In addition to this, one demerit point has been added to the disciplinary record of Stokes, for whom it was the first offence during a 24-month period.”

Security staff at the Wanderers have been told to be “more proactive” in
monitoring abusive comments from the crowd.

Ashley Giles, director of England men’s cricket, claimed after play on day one that members of the touring side’s support staff had also been targeted and said a request had been made for “enhanced” stewarding and security arrangements to be applied.

Reuben Niekerk, a representative of the venue operations centre, was oblivious to that appeal but said the matter had been addressed.

He told PA news agency: “The stadium is not aware of this request and we also
feel that the currently deployed security numbers is sufficient. Throwing additional numbers to a problem is not the solution.

“We have again reiterated to the field of play security (and other sensitive areas) to be more proactive in identifying spectators’ comments when players are in and around their respective areas (fielding on the boundary close to them or entering and exiting the field).

“In addition to this, the England team security have agreed to ensure that at
any given time at least one of them will be down at the dugout/tunnel entrance from field to closely monitor any comments from the spectators.”