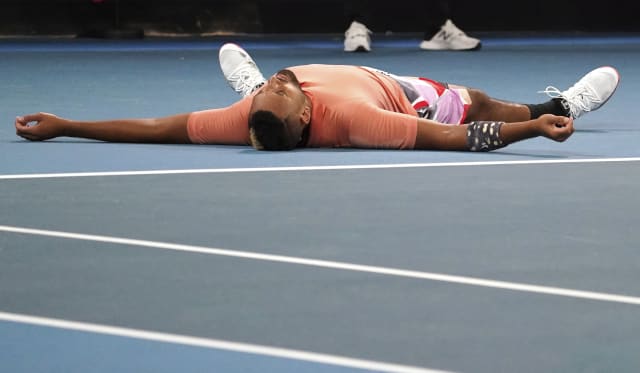 The Nick Kyrgios show will have another episode at the Australian Open after he edged a “crazy” five-set clash against Karen Khachanov to earn a crack at Rafael Nadal.

For the second successive night at Melbourne Park, the final match came down to a deciding tie-break, and, after Roger Federer’s Houdini act against John Millman, Kyrgios won the final three points to the delight of a delirious crowd on Melbourne Arena.

Kyrgios’ 6-2 7-6 (5) 6-7 (6) 6-7 (7) 7-6 (8) victory included the usual mix of the sublime and the ridiculous, taking in a series of delicious half-volleys, several tweeners, an underarm serve and a diving backhand winner that cut his hand and resulted in a row with the umpire over a time violation.

The 24-year-old had led by two sets and a break and also missed a match point in both the third and fourth-set tie-breaks, but somehow found a way to win after four hours and 26 minutes, the longest match of his career.

Kyrgios was almost speechless, saying: “Man it was crazy. I don’t even know what to say right now. That was insane. I’ve got no words for how I’m feeling.

“I was losing it mentally a little bit, obviously it wasn’t easy losing the third and the fourth having match points. My support team willed me over the line. I thought I was going to lose, honestly.”

The home fans lapped it all up and the end result is the contest that has been eagerly anticipated since the draw last Thursday, with Kyrgios’ task now to try to beat Nadal for the fourth time in eight meetings.

It will be their second clash in the last three grand slams after Nadal’s victory at Wimbledon, which was given extra spice by negative comments they made about each other, with Kyrgios branding the Spaniard “super salty”.

He said: “I’m super excited, honestly. Playing one of the greatest tennis players on centre court at your own slam, it’s pretty damn cool.

“At the end of the day, we’re two different tennis players. We go about it completely different.

“After Wimbledon, I lost, I got beaten by the better player. I shook his hand, looked him in the eye, and said, ‘Too good’. Regardless if we don’t like each other or whatever, I think there’s a layer of respect.

“Physically I think I’ll be fine. I have a whole day off tomorrow. I feel like my game is ready to go.”

Their tennis philosophies could not be more different and, asked about the Australian, Nadal said: “I don’t know him personally, honestly, to have a clear opinion.

“It’s clear, of course, when he does stuff that in my opinion is not good, I don’t like it. When he plays good tennis and he shows passion for this game, he is a positive player for our tour, and I want my tour bigger, not smaller.”

Kyrgios has been riding a rare wave of positivity in his homeland, where he has faced harsh criticism for his indiscretions, thanks to his efforts in leading tennis’ response to the wildfire crisis.

And evidence of what a draw he is for fans could be seen in the huge queues stretching around Melbourne Arena, while two men fighting in the stands had to be dealt with by security before the match began.

The only real concern for Kyrgios during the opening set was a medical timeout for treatment to his left buttock, and he kept his focus unerringly to take the second on a tie-break.

When he led by a break in the third set it seemed the finish line was near, but – as with his second-round match against Gilles Simon – Kyrgios became a little too casual and found himself in an almighty struggle.

Nadal, meanwhile, had a stroll in the sunshine in beating fellow Spaniard Pablo Carreno Busta 6-1 6-2 6-4.

The top seed did not allow his opponent a single break point and hit 42 winners compared to just seven unforced errors.

“It was my best match of the tournament so far, without a doubt,” he said. “A big difference between today and the previous days. I have been serving well, starting to create damage with the forehand.”

Fifth seed Dominic Thiem defeated Taylor Fritz in four sets and will next face Gael Monfils, who was a 7-6 (2) 6-4 6-3 winner over Ernests Gulbis.

Andrey Rublev’s remarkable winning run stretched to 15 matches, the Russian 17th seed recovering from a set and a break down to beat David Goffin.

He will next face seventh seed Alexander Zverev, who has played himself into strong form and eased past Fernando Verdasco 6-2 6-2 6-4.

Stan Wawrinka, who has been unwell, had a much-needed easy afternoon when opponent John Isner retired trailing 6-4 4-1, and he will take on fourth seed Daniil Medvedev, who was a 6-4 6-3 6-2 winner over Alexei Popyrin.