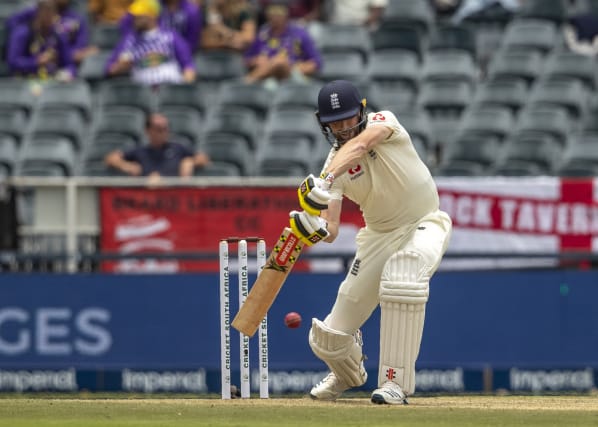 England’s tail end scored vital late runs as the tourists posted exactly 400 on the second afternoon of the decisive fourth Test against South Africa in Johannesburg.

Opener Zak Crawley suggested after finishing day one on 192 for four that anything over 300 would be a highly-competitive score on this Wanderers pitch, meaning England will fancy themselves well ahead of the game.

Overnight batsmen Joe Root (59) and Ollie Pope (56) both completed half-centuries but it was Mark Wood and Stuart Broad’s last-wicket stand of 82 in just 50 balls that really punished the Proteas.

Broad finished with four sixes and two fours in a joyous 43, while Mark Wood followed a similarly free-hitting effort in the last Test with three maximums of his own to finish 35 not out. Add in Chris Woakes’ 32, and England’s bottom three chipped in a remarkable 110 runs.

Resuming 45 minutes behind schedule after morning rain, Root and Pope added 64 without loss in a dominant first hour. Pope was in sensational touch early on, piercing the infield with cuts off Vernon Philander and Beuran Hendricks and at one stage allowing both feet to leave the ground as he climbed into an uppercut off to the third man boundary.

He reached fifty by stepping inside the line of a Anrich Nortje bouncer and crashing it straight between two boundary riders for four. Root had been happy enough to watch his young team-mate flourish, contributing just 15 to their first 50 runs together, but soon got the bug.

A trademark steer past gully got him got him going and three fours in a solitary Dane Paterson over meant his own fifty, number 47, was close at hand. South Africa were seemingly in for a bruising session, but the break in play brought a hasty realignment.

Nortje took three wickets in an extended spell of world-class seam bowling. First he persuaded Pope to play on as he attempted to leave outside off stump, then he had Root caught behind on the drive having just seen another edge go down at slip.

Sam Curran came and went for a golden duck, chasing a wide one and nicking off, and Nortje had single-handedly turned 258 for four into 269 for seven. Jos Buttler had the chance to be England’s hero but his disappointing series continued after tea when, on 20, he aimed an ugly hack at Philander and offered a steepler to Dean Elgar at cover.

Woakes became the final part of Nortje’s well-deserved maiden five-wicket haul when he edged to slip, and South Africa were close to wrapping things up at 318 for nine.

What unfolded instead might well have changed the game, Wood and Broad swinging the bat with abandon and to thrilling effect. The seamers were too short, too often and the last-wicket pair set a new record partnership at the ground before Broad fell just short and was held on the ropes off a chastened Paterson.