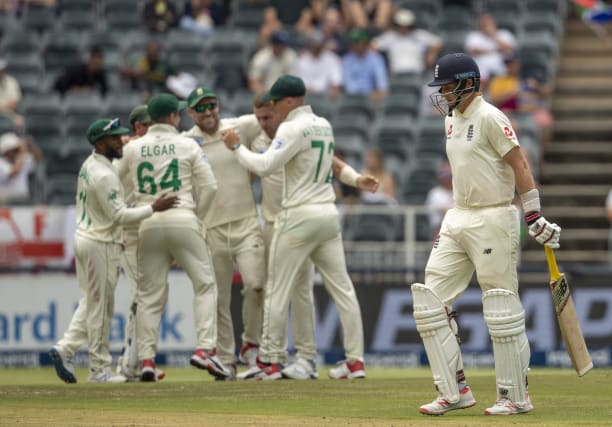 England pair Ollie Pope and Joe Root were both dismissed shortly after reaching 50 as Anrich Nortje dragged South Africa back into the fourth Test with a fine spell of pace bowling on day two in Johannesburg.

Resuming 45 minutes behind schedule after morning rain, England’s overnight score of 192 for four became 300 for seven at lunch, a handy position but one that threatened even more after a dominant first hour.

Pope and Root added 64 without loss up to drinks, taking their partnership to 101 and looked perfectly placed to keep on going. But Nortje struck back, bowling Pope for 56 before a pair of outside edges sent back Root for 59 and Sam Curran for a golden duck.

Pope was in sensational touch early on, leaving his own captain in the shade as he attacked anything wide and pierced the infield with cuts off Vernon Philander and Beuran Hendricks. At one stage both feet left the ground as he leapt to slash Hendricks to the third man boundary.

He was soon timing almost everything he hit, middling an on-drive with the full face of the bat and stepping towards off stump to pull a Nortje bouncer in between two boundary riders and reach his half-century in 61 balls.

Root had been happy enough to watch his young team-mate flourish, contributing just 15 to their first 50 runs together, but soon got the bug.

A trademark steer past gully got him going and three fours in a solitary Dane Paterson over meant his own fifty, number 47, was close at hand. South Africa were seemingly in for a bruising session, but the break in play brought a hasty realignment.

Pope attempted to leave the first ball after the restart but left his bat hanging and saw an inside edge clatter his stumps.

Nortje saw Root dropped at slip on 54, Proteas captain Faf du Plessis wrapping both hands around the ball before it squirmed loose, but cashed in with just five more runs.

Nortje came again, begging the drive with a 90mph tester and snaring the edge through to Quinton de Kock. The paceman allowed his line to slip a little too wide when Curran arrived at the crease for his first ball but a lazy swing of the bat brought identical results.

Nortje had single-handedly turned 258 for four into 269 for seven but Jos Buttler and Chris Woakes, who successfully left the hat-trick ball, shepherded England to the interval.