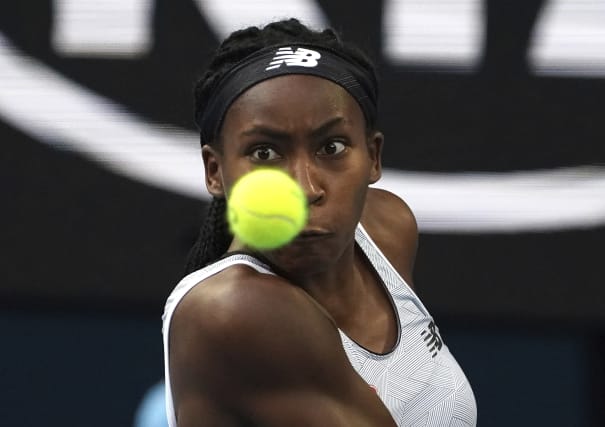 At 15, Gauff has now reached the fourth round at two grand slams, but this was on another level to any of her previous achievements as she comfortably defeated the player who lifted the trophy here 12 months ago.

Then it was Osaka who was being hailed as the player who could dominate women’s tennis and take it into a new era but increasingly it looks like that player will be Gauff.

There is a remarkable composure about the American and she kept her head impressively while Osaka lost hers, tumbling out of the tournament 6-3 6-4 in a flurry of errors.

“I love her, but I don’t like this feeling of losing to her,” said 22-year-old Osaka, who had beaten Gauff at the US Open last summer for the loss of just three games.

“I think just losing to her, that hurts more than the defending champion thing. I think it’s because I have an age problem. I don’t like losing to people that are younger than me. I took this very personally.”

Having been so composed during the match, Gauff was overwhelmed after it, saying: “Honestly, what is my life? Oh my gosh. Two years ago I lost first round in juniors, and now I’m here. This is crazy.

“I was just telling myself one point at a time and keep fighting because you never know what happens on this court. I’m on Rod Laver Arena, I can’t believe this.”

Gauff’s victory came several hours after title favourite Williams had been stunned by a player who won just 15 points against her in their last meeting at the US Open.

Wang had vowed to improve after that match and she certainly kept her promise, going toe to toe with Williams and not losing her cool when the 23-time grand-slam champion fought back.

Williams broke Wang when she served for the match in the second set and looked to have the momentum when she levelled up on a tie-break but instead it was the Chinese player who claimed a 6-4 6-7 (2) 7-5 victory.

Williams made 56 unforced errors and was disgusted with her own performance, saying: “I just made far too many errors to be a professional athlete today.

“If we were just honest with ourselves, it’s all on my shoulders. I lost that match. It’s not about the tournament, it’s just like I can’t play like that. I literally can’t do that again. That’s unprofessional. It’s not cool.”

The 38-year-old’s defeat meant the wait to equal Margaret Court’s record went on, but Williams added: “I definitely do believe (I can) or I wouldn’t be on tour.”

Wang will next face Tunisia’s Ons Jabeur, who ended Wozniacki’s final tournament with a 7-5 3-6 7-5 victory.

The Dane, who won her only grand-slam title here in 2018, was joined on court by her family afterwards while the tournament played a video of tributes paid by her friends and rivals.

Those included Williams, who became emotional in her press conference, saying: “She’s had an amazing career. She’s one of my best friends in the world. We have a great life for the rest of our lives together, but I’m going to miss her out on tour.”

Wozniacki is calling it a day at 29, and she said: “It’s exciting. It’s terrifying. It’s a lot of emotions at the same time. But I’m happy. I’m very happy. Even though I was crying a lot earlier, it really wasn’t sad tears.”

While chaos was reigning around her, top seed Ashleigh Barty eased into the last 16 with a 6-3 6-2 victory over in-form Kazakh Elena Rybakina and will next face Alison Riske, who she lost to at Wimbledon.

Petra Kvitova, the losing finalist 12 months ago, was an even more comfortable winner, beating Ekaterina Alexandrova 6-1 6-2, while Maria Sakkari gave the Greek fans plenty to cheer with a 6-4 6-4 upset of 10th seed Madison Keys.