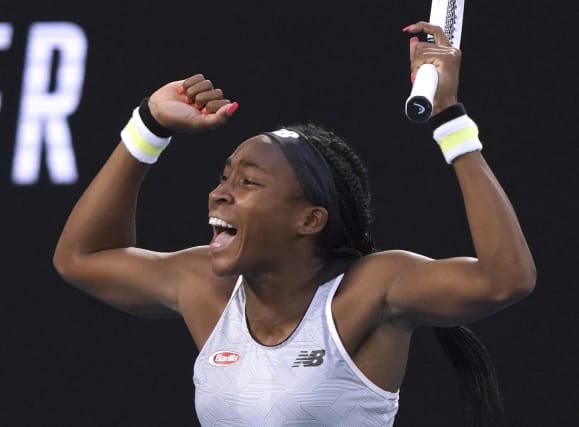 Coco Gauff stunned defending champion Naomi Osaka to reach the fourth round of the Australian Open.

The 15-year-old has already made headlines around the world but none of her achievements so far could compare to this as she took apart one of the best players in the world.

Gauff, who won just three games against Osaka when they met at the US Open last summer, was rock solid and took advantage of a error-strewn display from her opponent to win 6-3 6-4.

The teenager was stunned by her achievement, saying: “Two years ago I lost first round in juniors, and now I’m here. This is crazy.

“I was just telling myself one point at a time and keep fighting because you never know what happens on this court.

“I’m on Rod Laver Arena, I can’t believe this.”

Gauff said she had been too shy to speak to Laver when she had passed him in the corridor but hoped to set up a meeting.

Laver was quick to respond on Twitter, saying: “Hello Coco Gauff – congratulations on your incredible victory tonight. I would love to meet you too.”

The American is the youngest player to beat a top-five ranked opponent since Jennifer Capriati toppled Gabriela Sabatini at the 1991 US Open.

While this was a spectacular day for Gauff, it was a desperately disappointing one for Osaka, who had battled so brilliantly to win her second grand slam title here 12 months ago but succumbed meekly and could now drop out of the top 10.

Gauff must have taken inspiration from Wang Qiang, who was brutally hit off the court by Serena Williams in New York last summer only to beat her on the same court earlier in the day.

What was clear from the start was how much Gauff’s serve has improved and she comfortably kept Osaka at bay while displaying her remarkable composure for a player so new to this level.

Gauff would still be considered young in the juniors but there is no doubt she belongs on the biggest stages the sport has to offer.

The teenager was trading well with Osaka from the back of the court and, as the first set progressed, it was the defending champion who started to snatch at her shots, missing a succession of backhands.

From 3-3, Gauff won three straight games to move a set in front and then broke the Osaka serve again at the start of the second set.

She had two chances to hold for 2-0 but could not take either and it seemed the chink of light that Osaka needed to get a foothold in the match again.

But the Japanese player simply was not playing well, and the unforced errors continued to flow.

Gauff broke again to lead 4-3 and, although Osaka forced her young opponent to serve it out, a comeback never looked on the cards.