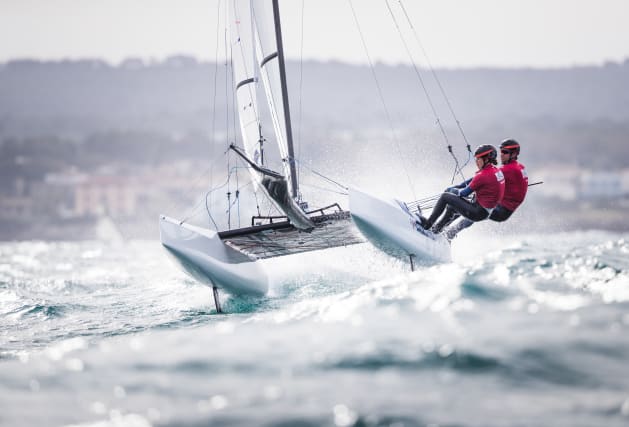 Britain’s latest Olympians have been training in protective face masks to combat the effects of deadly bushfires that continue to rage close to their base near Melbourne.

John Gimson and Anna Burnet, who compete together in the Nacra-17 class, have been officially added to the final 14-strong Team GB sailing squad for the Tokyo Games.

And they have been forced to adopt extreme methods to maintain their strict training programme as they build up to next month’s World Championships up the coast off Geelong.

Gimson told the PA news agency: “We’ve ended up training in the masks to stop us breathing in too much smoke. On bad days we’ve literally only had a few hundred metres of visibility.

“Although the fires are 100 kilometres away, the smoke can get really thick when the wind changes and it is blown out to sea.

“It’s been unhealthy to be outside and we’ve missed two days of training on medical advice. It is awful to think that if it is so bad here, what it must be like for people closer to the fires.”

Given Gimson’s history of near-misses when it comes to qualifying for the Olympics, it is hardly surprising he has fought on through the difficult conditions.

Before switching to the Nacra – a hydrofoil whose speeds can exceed 30mph – he saw both his previous classes, Star and Tornado, dropped from the Games and began to doubt his Olympic dream.

“It’s been a long journey and there’s been some massive disappointments along the way,” said Gimson. “But I think it has given me a much better understanding of what it takes to be an Olympian.”

Burnet, who grew up sailing off the west coast of Scotland, revealed the choice to team up with Gimson was an easy one, despite the evident dangers associated with the fastest boat in the Olympic fleet.

Burnet said: “I like the adrenaline rush that comes with sailing the Nacra – it really rewards being fast and agile and it crashes into a lot of waves.

“The Tokyo sailing venue at Enoshima is renowned for getting huge ocean swells which in the Nacra is really challenging.

“It can get really scary and it will come down to who masters the conditions. But we are very comfortable with the way we sail on waves in relation to other people.”

Gimson and Burnet have secured consistent top five finishes this season and won silver medals at the European Championships, the World Cup final and the Olympic test event.

They head into next month’s World Championships with Burnet convinced she can count on the Olympic experience she gained from previously training alongside champions Hannah Mills and Saskia Clark.

“It was my first real insight into what it took and I learned that even the small things can be so important,” said Burnet.

“It’s really cool to be a part of the Olympic team and I think the event is really going to suit us.”