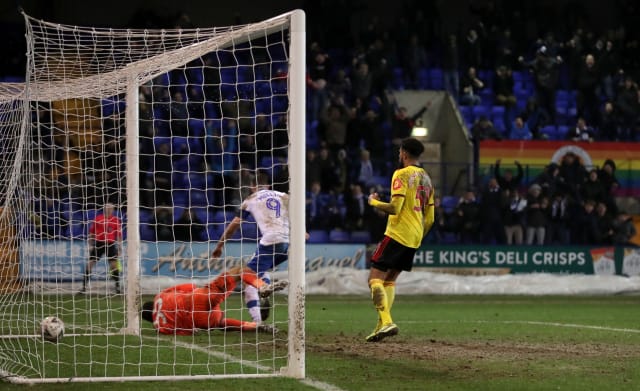 Tranmere striker Paul Mullin booked a dream home fourth-round tie against Manchester United with an extra-time goal that earned his side a 2-1 FA Cup upset against an understrength Watford.

The 25-year-old, who also scored the equaliser at Vicarage Road on January 4 which earned this replay, nodded in at the far post having missed a chance in regulation time to put the tie beyond their Premier League opponents.

It was no more than the Sky Bet League One side deserved, having taken the lead through centre-back Manny Monthe only for substitute Kaylen Hinds to equalise on his debut.

A tie against dogged opponents on a dodgy pitch in front of a packed Prenton Park is the last thing Ole Gunnar Solskjaer’s struggling United side will have wanted considering their recent troubles.

Watford’s excuse for losing to a team 46 places below them is that manager Nigel Pearson had no intention of taking this tie seriously as he is prioritising Premier League survival.

He made 11 changes for a second match in 48 hours, with none of those who started Tuesday’s 2-1 defeat at Aston Villa even in the squad.

The seven other outfield players’ combined age was just 137 and that lack of experience was evident as they showed little appetite for the challenge presented by a League One side on a sub-standard pitch marked with bald patches and heavily sanded down both wings.

Heavy rain had forced postponement of this fixture last week and, while the pitch remained an issue, the hosts used their familiarity with the circumstances to their advantage.

Corey Blackett-Taylor had a good first half and should have scored when a sweeping crossfield move from right to left reached him, but he was wide with his angled shot.

When Kieron Morris’ shot was parried by Daniel Bachmann, Blackett-Taylor, under pressure, ballooned the rebound over.

Watford did not seem to have much of an idea how to handle opponents snapping at their ankles and who were first to the 50-50s, while still being able to knock it around at times.

If Rovers were guilty of one thing it was not getting their crosses in often enough, but when Blackett-Taylor swung over a corner, Monthe volleyed home left-footed from the edge of the area off the inside of the post.

Having scored five in the previous five seasons, the big centre-back now has three in four appearances, including one at Vicarage Road.

The visitors did not test Scott Davies until four minutes after half-time, when Brazilian teenager Joao Pedro, in only his second appearance after work permit clearance in October allowed him to be registered in January, forced a good low save having broken through.

As the hosts began to tire and drop deeper, Watford sensed their chance and Holebas’ powerful strike against the angle of post and crossbar was a warning shot.

It was one they did not heed as the 21-year-old Hinds, a half-time substitute and Arsenal academy graduate, drilled the equaliser through a crowd of players from a corner.

Mullin rounded the keeper and should have scored but hit the outside of the post from a narrow angle, while Neil Danns drove wide with virtually the last kick of the 90 minutes.

Watford’s Callum Whelan, a former Manchester United trainee who would have had one eye on a fourth-round meeting with his former club, forced the first save of extra time.

But Tranmere struck the decisive blow just before the interval, with Mullin converting Blackett-Taylor’s flick-on.

Watford introduced Henry Wise – son of three-time FA Cup winner Dennis Wise – from the bench for the closing minutes, but he was unable to make a decisive impact.