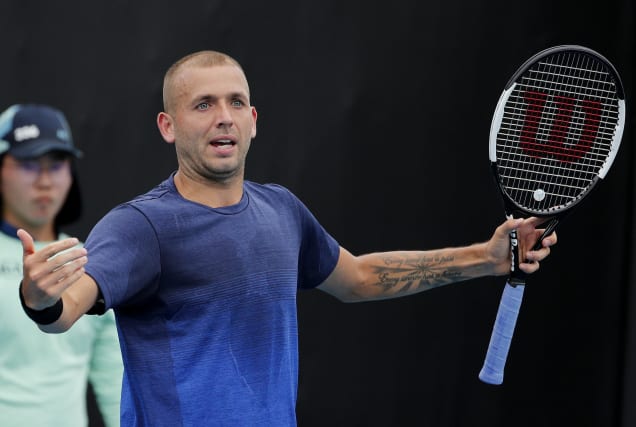 Mats Wilander was disappointed by Dan Evans’ attitude in his Australian Open defeat by Yoshihito Nishioka but believes the British number one is good for the sport.

Evans admitted after the straight-sets loss on Wednesday that he had hoped Nishioka would lose in the first round because he does not like playing the Japanese.

The 29-year-old’s chequered past is well known but seven-time grand slam champion Wilander compared him to Nick Kyrgios as someone who makes tennis more accessible.

The Swede, who is part of Eurosport’s team of experts, said: “To me, Dan Evans is an example of somebody that puts the clock back a little bit and tells everybody: ‘Listen, tennis is not a freak sport where you need to have rich parents, who sit in your players’ box for every single week of the whole year, and you need to talk to your coaches’ box between every shot.’

“He’s a normal human being who struggles through certain things in life. He’s winning matches. Then he says he wasn’t up for it.

“Is he going to win majors with that attitude? No. Will he make tennis more accessible in people’s minds in their normal homes? Yes.

“We need him. For the world to go round in tennis. We need Nick Kyrgios as well. Thank god we have them. But, yes, I was disappointed.”

Wilander also voiced his opinion on Evans’ revelation that he will probably reject the opportunity to represent Great Britain at the Tokyo Olympics this summer.

Evans is reluctant to miss a part of the American hard-court season that provides the opportunity for ranking points and prize money for an event that carries neither.

Wilander missed the Olympics in 1988 and has spoken out in the past about the relevance of the tennis event at the Games.

In recent years the majority of the leading players have competed, with the likes of Rafael Nadal, Roger Federer, Andy Murray, Serena Williams and Venus Williams all winning multiple medals across singles and doubles.

But Wilander believes the sport should look at the format to ensure players like Evans, who has been a stalwart for Britain in team competitions, want to compete.

He said: “Very strange. That tells me again, though, that, when Dan Evans from Birmingham chooses not to play the Olympics, do we have to be looking at what the Olympics mean in tennis?

“Should it be a team competition instead of Davis Cup at times? Should it be a 128 draw over two weeks? I don’t know. What it should be?

“If it doesn’t mean more to a normal human being like Dan Evans, who could change his life and career by winning not a gold but a bronze medal for Great Britain, if he doesn’t want to take that chance, I would say something is wrong with the Olympics in what it’s worth in tennis.

“I think the players are doing a tremendous job of trying, and it means a whole lot to the best players because to them it is what they are missing.

“But, to the other players, to not think that winning a bronze is worth more than being top 20 because of points you didn’t deserve to win because no one is competing, that seems like they need to reorganise the competition. It needs to be worth more in players’ minds.”

:: Watch all courts, all matches of the Australian Open live on Eurosport and Eurosport Player