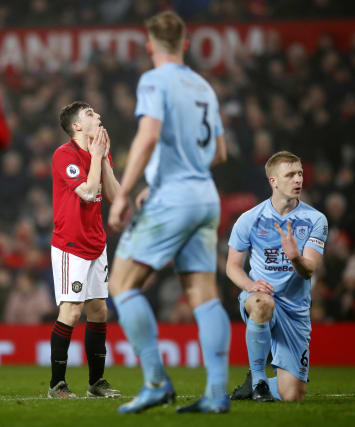 Daniel James admitted Manchester United’s performance against Burnley “simply wasn’t good enough” during an embarrassing defeat that darkened the mood but has not put Ole Gunnar Solskjaer’s job in jeopardy.

The galling loss at bitter rivals Liverpool was compounded on Wednesday evening as a turbulent season reached a new nadir to a backdrop of fan discontent.

Burnley triumphed at Old Trafford for the first time since 1962 thanks to Chris Wood and Jay Rodriguez goals, with the 2-0 defeat meaning United have now lost more Premier League games than the 11 they have won since Solskjaer’s permanent appointment in March.

However, United fans continued to chant the 1999 treble hero’s name during Wednesday’s chastening loss – striking given the abuse, and at times sinister chants, aimed at the Glazer family and executive vice-chairman Ed Woodward.

The PA news agency understands Solskjaer retains the backing of the United hierarchy, just as he has done throughout the campaign, but summer signing James knows they have to improve.

“We need to, as a team, take chances better. Today we had quite a number of shots.

“I think obviously we should have got that first goal, the amount of chances we had first half.

“We conceded that goal and I think we went on then and it simply wasn’t good enough, yeah.”

James bemoaned a lack of cutting edge during a promising United start that quickly unravelled, with Solskjaer’s side mustering precious little response to Burnley’s goal either side of half-time.

Rodriguez’s stunner early in the second half led to renewed, furious chants at Old Trafford calling for the owners and Woodward to leave, with the vast majority inside the ground rising to their feet as “stand up if you hate Glazers” echoed around.

There were jeers at the final whistle from those that had not filed out early, but there remained support for Solskjaer and the players in-between songs aimed at the ownership.

James said: “I think every week, home and away, they cheer us on and stick by us.

“We’re obviously going to react from this. We know that wasn’t good enough today.”

United have no time to wallow in self pity given the frantic fixture schedule, with an FA Cup fourth-round tie against Tranmere or Watford coming up on Sunday.

A trip to Manchester City for the second leg of the Carabao Cup semi-final, a match they head into 3-1 down, follows on Wednesday, before attention turns to narrowing the gap to the top four with United still fifth.

“I think that’s obviously still up for grabs,” James said of the Champions League spots. “We’ve got to keep fighting.

“I think tomorrow we’ll reflect on this game and then see what obviously went wrong today. Then we’ve got two big cup games coming up. We’ve got to go into that with heads held high.

“I think obviously the league game isn’t for another couple of weeks now, so obviously that’s on our mind but it’s all about concentrating on the next game.”

Asked if it is good to have another match coming up so quickly, James told MUTV: “I think so, yeah.

“Obviously we’ve got tomorrow to reflect on this game but we’ll do a lot on the next game.

“It’s going to be a tough game and obviously next week as well is another cup game but it’s a chance for us to react.”