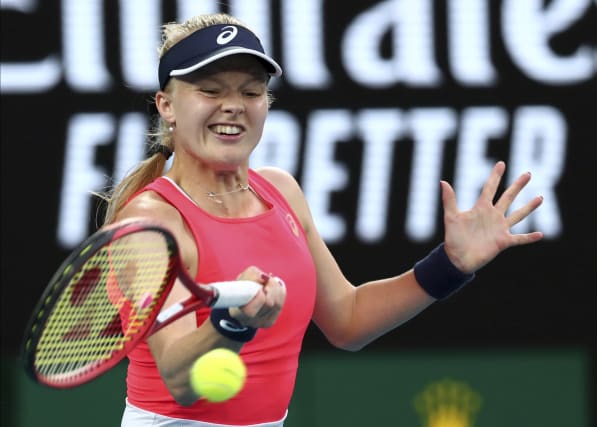 British singles interest in the Australian Open ended as Harriet Dart suffered a battling defeat to Wimbledon champion Simona Halep in the second round.

Dart was making her second appearance on Rod Laver Arena in as many years having failed to win a game against Maria Sharapova in the first round 12 months ago.

She avoided that fate comfortably this time and had Halep worried when she fought back from 5-1 down to 5-4 in the second set, saving a match point.

That proved to be as good as it got but Dart can take great confidence from her performance in the 6-2 6-4 defeat.

Heather Watson lost heavily earlier to Elise Mertens, meaning Britain’s seven representatives managed three wins between them, and it is the second year in a row in Melbourne there is no British interest in the third round.

Dart began confidently enough and, after dropping serve in the opening game, broke Halep to love in the second, landing some meaty backhands.

But the fourth seed is a class act and the rest of the set went quickly away from Dart until a late rally.

The 23-year-old also played world number one Ashleigh Barty at Wimbledon, winning two games, so she is gaining experience of facing the top names on the biggest stages.

At 4-0 down in the second set, a heavy defeat seemed on the cards but Dart dug in to hold serve in the fifth game and a foothold turned into something more.

She showed terrific fight and athletic ability in a long point to hold for 2-5, clinching it with a forehand winner, and then saved a match point on the way to a break of the Halep serve in the next game.

Dart had one chance to make it 5-5 but missed a backhand and Halep took her fourth match point to claim victory after an hour and 17 minutes.

Thanks to her three victories in qualifying and one in the main draw, Dart’s ranking is projected to rise from 173 to 141, and her next outing could well be in Britain’s Fed Cup play-off against Slovakia in two weeks’ time.

Wimbledon cancelled due to coronavirus pandemic

The key questions answered as Wimbledon 2020 is cancelled