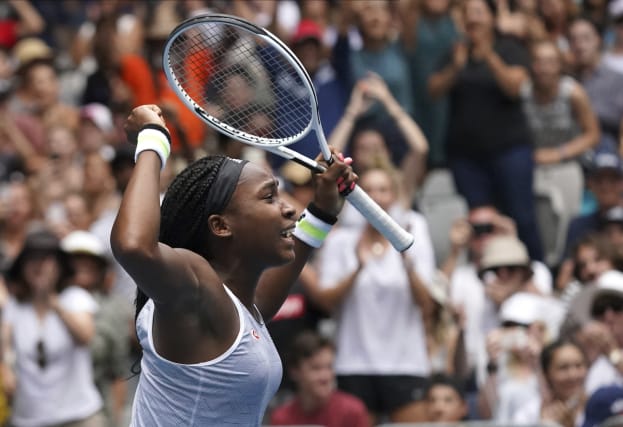 Coco Gauff will have another shot at defending champion Naomi Osaka after battling past Sorana Cirstea and into the third round of the Australian Open.

The pair met at the same stage of the US Open last summer, when Osaka produced a complete performance to beat the 15-year-old 6-3 6-0 and then consoled her when Gauff’s disappointment got the better of her.

The American said: “I think I’ll be less nervous this time. US Open I was nervous. It was my first time on (Arthur) Ashe. We’re both familiar with each other’s games. She plays really aggressive. This time coming in I’m going to be more aggressive.”

Osaka’s show of empathy in New York made headlines around the world, and Gauff added: “It was definitely a good moment I think for both of us, especially me.

“But I think more just for the people watching, the little girls watching and little boys who can kind of see what sportsmanship is.

“If I had a child, that’s something I would want my child to see. You might hate the person on the court, but off the court you love them. Not really like hate. But you want to win.

“Sometimes when we’re on the court we say things we don’t mean because we have that mentality. When it’s all said and done, we still look at each other with respect.”

The teenager has now made at least the last 32 on all three of her senior slam appearances, and her star quality was again on show as she recovered from 0-3 in the deciding set to beat Romanian Cirstea 4-6 6-3 7-5.

It is remarkable how quickly Gauff has become one of the biggest draws in the sport and the packed Melbourne Arena crowd roared her on to victory.

She said: “I think I was just trying to stay calm mostly and stay positive. I’ve always believed that I can come back regardless of the score. I think 0-30, 0-3, that’s when I kind of changed everything and decided to be more aggressive.”

Osaka has won both her matches in straight sets but was frustrated by the windy conditions during a 6-2 6-4 victory over Zheng Saisai.

The third seed slammed her racket to the court, saying later with a smile: “My racket just magically flew out of my hand. I couldn’t control it. Sorry Yonex.

“I think that’s how I dealt with my frustration. It was a bit childish. I just want to play one match without throwing my racket or kicking it.”

Caroline Wozniacki kept retirement at bay for another day with a compelling fightback to defeat hotly-tipped 23rd seed Dayana Yastremska.

The Dane’s 7-5 7-5 success having been 5-1 down in the opening set and 3-0 in the second was a fitting showcase for the attributes that have kept her at the top of the game for the last decade and more.

Having been blown away by a barrage of power, Wozniacki dug in, denying Yastremska rhythm and winning six straight games to take the opening set.

A fourth-round clash with great friend Serena Williams, which would be a fitting way to end her career, is looming but first she must get past tricky Tunisian Ons Jabeur.

Wozniacki said of her comeback: “She hit so hard and so precise I just didn’t know what to do.

“Then she started making a few more errors and I tried to mix up the pace. The crowd really got behind me and it was so special.”

The Dane had tears in her eyes during her post-match interview as she added: “I felt pretty calm then I was 5-1 down and I was thinking hopefully I can be out here for another 30 minutes to try to take it in. It’s a little emotional for me.”

Top seed Ashleigh Barty dropped a set in the opening round but found a second-round clash with Polona Hercog much more comfortable, the great Australian hope winning 6-1 6-4.

Barty could be tested next, though, when she takes on fast-rising 29th seed Elena Rybakina.

Petra Kvitova, who lost to Osaka in the final last year, battled to a 7-5 7-5 victory over Paula Badosa but 11th seed Aryna Sabalenka was beaten 7-6 (6) 7-6 (6) by Carla Suarez Navarro and Julia Goerges knocked out 13th seed Petra Martic.