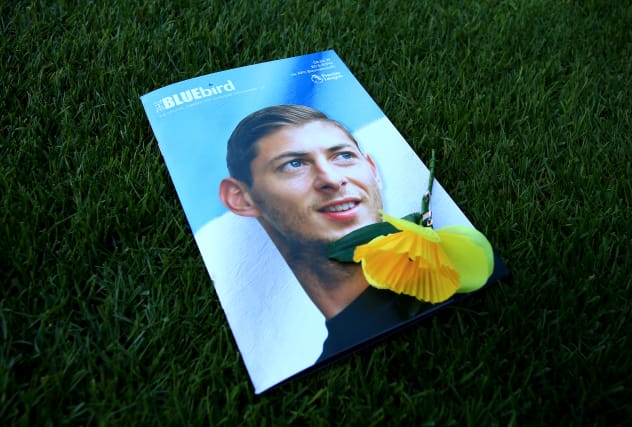 Cardiff have expressed their sympathy to the friends and family of Emiliano Sala on the anniversary of the striker’s death.

The Argentinian forward died on January 21, 2019 when the plane carrying him from Nantes in France to his new club Cardiff crashed in the English Channel near Guernsey.

The footballer’s body was recovered from the wreckage, but pilot David Ibbotson, from Crowle, North Lincolnshire, has still not been found.

“All of our thoughts are with the family and friends of Emiliano Sala and (pilot) David Ibbotson,” said a Cardiff club statement on behalf of the owner Vincent Tan and the board.

“The pain they have been through over the last 12 months must be indescribable.

“To mark the anniversary we are welcoming supporters to lay floral tributes at the Fred Keenor Statue throughout the day.”

Sala’s family will mark the anniversary of the striker’s death in “private, quiet contemplation of their loss”, their British lawyer has said.

“The Sala family will mark the anniversary of the untimely death of Emiliano in private, quiet contemplation of their loss,” Daniel Machover, of Hickman & Rose solicitors, and representing the family, said in a statement.

“The family’s primary concern remains for the full inquest to take place as soon as possible, so that they can finally learn the truth about what happened and ensure that no family has to suffer a similar preventable loss of a loved one.

“Therefore, in the run-up to the pre-inquest review hearing on 16 March 2020, it is imperative that the coroner receives by 14 February 2020 (and then promptly shares with the family) the update required by the coroner from all investigating bodies – the police, CAA (Civil Aviation Authority) and AAIB (Air Accidents Investigation Branch)

“The CAA in particular must speed up its work.”

Sala’s father Horacio died three months after his son, suffering a heart attack at his home in Progreso.

But he said before his death that all parties involved in the transfer – including clubs and agents – should have made more effort to look after the welfare of his son.

Sala was exposed to high levels of carbon monoxide prior to the crash, a report later revealed.

Cardiff – who were in the Premier League at the time – and Nantes have since been in dispute over fee payments.

The Welsh club unveiled Sala two days before his death, but have argued they were not liable for the full £15million transfer fee because the 28-year-old was not officially their player when he died.

The case was heard by FIFA’s players’ status committee, with the world governing body announcing at the end of September that Cardiff had been ordered to pay the first instalment of Sala’s transfer fee – six million euros (just under £5.2m).

Cardiff appealed against that ruling and it will go before the Court of Arbitration for Sport (CAS) in Lausanne, Switzerland. The final decision is not expected before June 2020.

Cardiff are not holding an official vigil to mark the anniversary of Sala’s death, but have said fans are welcome to lay tributes at the Fred Keenor statue outside Cardiff City Stadium throughout the day.

The statue was the spot where Cardiff fans laid floral tributes, scarves and shirts in memory of Sala last year.

There will be a service at Cardiff Cathedral on Tuesday afternoon to remember Sala and Ibbotson.

Nantes – for whom Sala scored 42 goals in 120 league games during three-and-a-half years at the club – will wear a special commemorative shirt at the Ligue 1 home game against Bordeaux on Sunday.

“Because he dreamed of the Albiceleste (Argentina national team), the players will swap their yellow shirt for one inspired by his home country,” Nantes said on their official club website.

“All the proceeds from sales of this shirt will be allocated to the two Argentinian clubs (Club San Martin de Progreso and Proyecto Crecer) where Emiliano began his career.”

Nantes, who have already retired Sala’s number nine shirt, will unveil a canvas of him in the centre-circle before kick-off against Bordeaux, another of his former clubs, while a special fan banner and a minute’s applause is also planned.