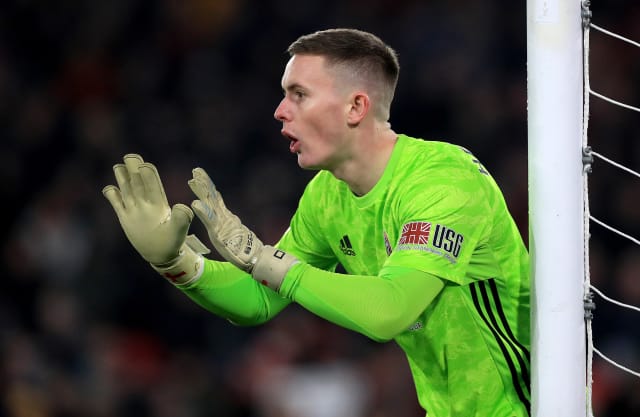 Chris Wilder has backed Dean Henderson to go to Euro 2020 with England and revealed Sheffield United have already held talks about extending his loan from Manchester United into a third season.

Though he could not prevent a 1-0 defeat to Manchester City on Tuesday night, Henderson was in inspired form as he made a string of saves including a Gabriel Jesus penalty and a bicycle kick from Nicolas Otamendi.

Henderson received his first senior England call up in October following an injury to Tom Heaton, and Wilder expects the 22-year-old to be involved again soon during the next round of internationals.

“I know there is a bit of a pecking order in that England group but they must be really good goalkeepers to be getting in ahead of him,” Wilder said.

“The competition is fierce and there are some good goalkeepers, but I see him up close every day.”

Henderson drew criticism for the high-profile mistake he made when Liverpool won 1-0 at Bramall Lane in September, but Wilder said his response to that setback showed his character.

“He is still a baby,” he said. “People talk about goalkeepers at 27, 28, 29 so he still has five or six years on them. The quicker he learns the better he will be. Sometimes you have to go through a bit of pain and he did that.

“He has been outstanding for me here. He has not been error-free but he does show the ability to move on and learn. To chuck one in against Liverpool live on TV and come on as he has shows a lot about his character.”

Henderson, who is in his second season on loan with the Blades, has spoken about his desire to be first-choice at Old Trafford in the future, but Wilder wants him to stay in Sheffield at least a little longer.

“He wants to play first team football,” he said. “I am not sure he will want to play back-up to anyone. If he was to come here for us for another year we would take that up and we are already talking with Manchester United about that.”

Henderson’s save from Jesus added to Manchester City’s woes from the penalty spot this season, and Pep Guardiola said he would have to consider a change of penalty takers.

Aguero, the regular taker, was not on the pitch at the time but City’s alternatives have faltered this season and Guardiola wants a re-think.

Asked who his best penalty taker might be, Guardiola volunteered the name of goalkeeper Ederson.

“Believe me Eddy is the best one we have,” he said with a smile. “He has no blood in his veins. He’s so calm so he could do it.”