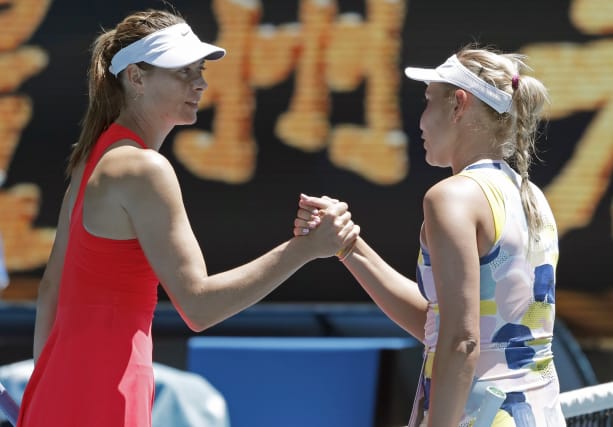 Maria Sharapova offered no guarantees that she will be back at the Australian Open after a first-round defeat against Donna Vekic.

Ongoing shoulder problems limited Sharapova to a handful of tournaments last year and her ranking is projected to drop to world number 366 as a result of the 6-3 6-4 loss to the 19th-seeded Croatian.

Sharapova needed a wild card to play at Melbourne Park, where she won the title in 2008, and had good recent memories having reached the fourth round last year, beating defending champion Caroline Wozniacki.

The Russian cut a disconsolate figure in her post-match press conference and, asked whether she will be here next year, she replied: “I don’t know.

“I was fortunate to get myself to be here and thankful to (tournament director) Craig (Tiley) and the team allowing me to be part of this event. It’s tough for me to tell what’s going to happen in 12 months’ time.”

Sharapova led 4-1 in the second set only for Vekic to fight back and win five games in a row, with the Russian hitting 19 winners and making 31 unforced errors.

She said of her ranking drop: “I don’t know if I can look at the ranking and really think about it in depth just because I really haven’t played and I was injured most of the year. I certainly have to take that into account.

“I put myself out there. As tough as it was, I finished the match and it wasn’t the way that I wanted.

“There is no way to get out of it except to keep believing in yourself because, if you do do all the right things and you don’t believe in yourself, then that’s probably a bad formula.”

The big question mark concerns whether Sharapova’s shoulder will ever be in a condition to allow her to play a decent block of tournaments.

“I don’t have a crystal ball to tell you if I can or if I will, but I would love to,” she said.

Second seed Karolina Pliskova continued her winning run after lifting the warm-up title in Brisbane with a 6-1 7-5 victory over France’s Kristina Mladenovic.

Sixth seed Belinda Bencic was a 6-3 7-5 winner over Anna Karolina Schmiedlova and there were also victories for in-form youngsters Dayana Yastremska and Elena Rybakina.

Yastremska, seeded 23, next faces Caroline Wozniacki in what could be the final match of the Dane’s career.