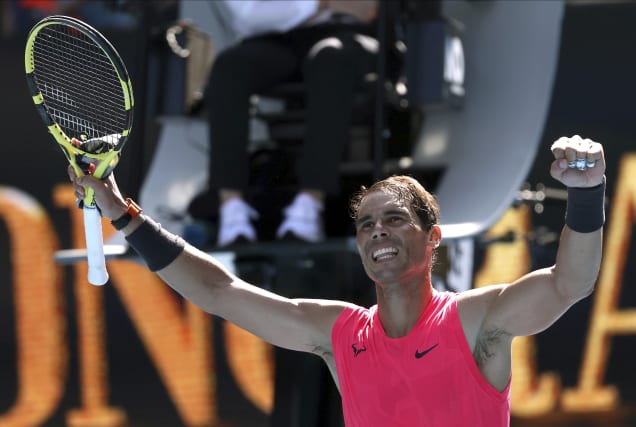 Rafael Nadal eased himself into the Australian Open second round to begin his bid for a record-tying 20th grand slam title.

Nadal’s victory at the US Open last summer brought him to within one of Roger Federer’s mark.

Melbourne has been home to Nadal’s least-successful slam, with his only title here coming 11 years ago, although he has reached four finals since, including last year’s defeat by Novak Djokovic.

Nadal made a convincing start with a 6-2 6-3 6-0 victory over Hugo Dellien, the first Bolivian ever to play in the Australian Open.

Nadal was kept out on court for more than two hours, though, and he admitted he played it safe in the first two sets.

“It has been a solid start,” said the world number one, who next faces either Federico Delbonis or Joao Sousa.

“I think the third set was a great set. I think I played a very good level of tennis. The first two I played with a little bit more caution.

“Just try to do the things that I know that I can do it. Just try to put myself on rhythm. That was my goal at the beginning of the match.

“Then, with an advantage on the score, I just tried to play the way that I really believe I need to play if I want to have a positive result here.”

Asked if he was thinking about number 20, Nadal said: “I think about Sousa or Delbonis. That’s all. I think about my practice of tomorrow, try to follow up the level of tennis that I played in the third set.

“So I don’t care about 20 or 15 or 16. I just care about trying to keep going, keep enjoying my tennis career.

Twentieth seed Felix Auger-Aliassime followed his fellow Canadian prodigy Denis Shapovalov out in the first round, losing in four sets to Ernests Gulbis, who posted his first main draw win in Melbourne for six years.

Andrey Rublev made it 13 victories in a row after titles in Doha and Adelaide despite losing the second set 6-0 to Australian wild card Chris O’Connell, and fellow Russian Karen Khachanov also won in four sets.

There was a notable first grand slam victory, meanwhile, for 18-year-old Italian Jannik Sinner, who won the Next Gen ATP Finals in November and is the hottest teenage talent in the men’s game.

Maria Sharapova has been sharing coach Riccardo Piatti with Sinner, and said: “He’s kind of, in front of everyone’s eyes, really improving with every week.

“It’s really fun to see. He has a really good, humble personality, which is – I think – even better to witness.”