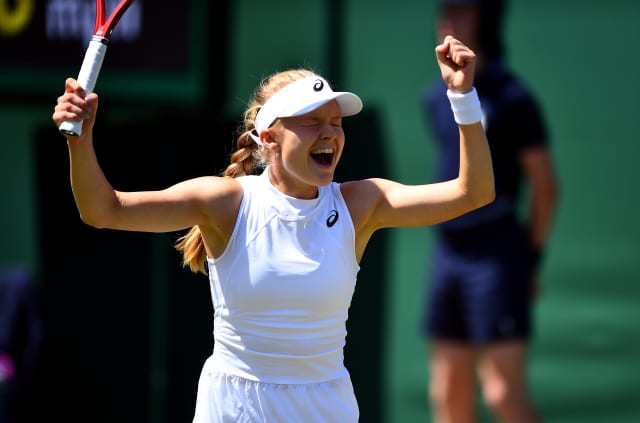 Qualifier Harriet Dart bucked the trend of British disappointment on the second day of action at the Australian Open to record her first main draw victory at Melbourne Park in dramatic fashion.

Twelve months after failing to win a game against Maria Sharapova, Dart won nine of the last 10 points to beat Japan’s Misaki Doi 2-6 6-4 7-6 (6) after two hours and 49 minutes.

Dart lost eight games in a row to go from 2-0 up in the opener to 2-0 down in the second set but dug in admirably and looked poised for victory at 6-5, 40-15 in the deciding set only to miss two forehands.

Her chance seemed to have gone when Doi opened up a 5-1 lead in the deciding first-to-10-points tie-break but Dart refused to let the match slide away and booked a second-round date with Wimbledon champion Simona Halep.

It was a much-needed British success story after defeats for Johanna Konta, Kyle Edmund, Katie Boulter and Cameron Norrie.

Konta was the 12th seed but she lasted little over an hour against Tunisia’s Ons Jabeur before going down 6-4 6-2 – the first time she has lost in the opening round at Melbourne Park.

The considerable mitigating factor was that Konta had only played one match since a quarter-final loss at the US Open in early September because of a knee injury that might have kept her away from Australia, too.

Konta took solace in the fact her knee is much improved and felt she paid for a lack of matches.

She said: “It’s an unfortunate thing. It’s part of the sport and it’s part of also the way I play, and it’s something that will come with time and matches.

“I think ultimately the main thing was to start playing again, and I am. And how I physically felt out there is obviously a massive tick for me compared to where I was in September of last year.

“I think giving myself that time to find a level that I want to play is going to be important. And I also played a very good opponent. So it’s not all on my racket.

“I knew that by taking a decision to come play here, I was opening myself up to potentially it not going well or for it to be difficult.”

Edmund, like Konta a previous semi-finalist here, had a tough draw against in-form 24th seed Dusan Lajovic but had led 5-2 when the rain arrived on Monday.

Lajovic won three straight games on the resumption though, and took the opening set on a tie-break to the delight of his noisy Serbian fans.

The match continued to be close but any glimmers for Edmund were snuffed out by Lajovic, who completed the 7-6 (7) 6-3 7-6 (4) victory with a running forehand winner.

The British number three said: “Ultimately it’s disappointing because I’m out of the tournament. I thought he was playing pretty well.

“Normally he’s given away a little bit more cheap points. But today he was good. And I just found that he was being a bit more proactive than me. I didn’t come out sharp enough.”

Edmund will look to push his ranking up from its current mark of 65 back into the top 50 and beyond, with few ranking points to defend after his disappointing 2019.

He said: “I feel like I am playing better than I was this time last year. I want to be playing better and winning more matches. They are not coming at the minute. I have to keep going. I don’t think I am too far away.”

Boulter was back on the grand-slam stage for the first time since reaching the second round here 12 months ago after a back injury ruled her out for six months.

She had a very tough draw against fifth seed Elina Svitolina and acquitted herself well before going down 6-4 7-5.

Boulter said: “I knew if I could string a few points together here and there then I was in with a chance. I think I played some really good points but I also gave a lot away, which for me is quite disappointing because I expect better of myself.

“But it was a good match, I have to take the positives from it. I haven’t played a match like that in a very long time.”