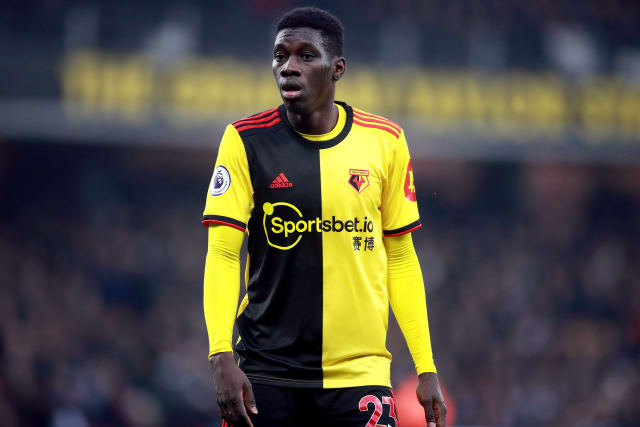 Watford’s in-form winger Ismaila Sarr has been ruled out of his side’s Premier League trip to Aston Villa on Tuesday night.

Nigel Pearson’s rejuvenated squad will look to maintain their impress run of form in a crunch relegation fixture at Villa Park.

But they will have to do so without Sarr, who was named man-of-the-match in Watford’s goalless draw against Tottenham at Vicarage Road before he limped off with a late hamstring injury.

“We are still waiting to see what the extent of the injury is,” said manager Pearson. “He is not going to be available for tomorrow’s game.

“We will deal with it, and there is no point in me getting ahead of myself, but he has been such a positive player for us.

“After tomorrow’s game, it is an FA Cup weekend again, so hopefully we will have him available for the next Premier League game against Everton, but we don’t know at this moment in time.”

Sarr’s absence will come as a blow to Pearson, whose squad travel to Birmingham on a run of seven matches unbeaten in all competitions.

Pearson has overseen Watford’s tremendous streak, which has lifted them out of the Premier League drop zone.

Victory against Villa, who sit one point and one place below the Hornets in the table, would mark a huge statement of intent in the scrap for top-flight survival.

The two teams met at Vicarage Road three days after Christmas, with the home side running out 3-0 winners.

“I don’t take anything for granted in football, and I don’t buy into the thought that just because something happened a couple of weeks ago, it is going to happen again,” added Pearson.

“They will want to reverse the last result and because we are both in a difficult situation they will be up for the fight. There is no doubt about that.

“Whenever you play sides in and around your own situation, the benefits of a win are huge and we go into the game with every intention to try and win.

“It will be another big match for us but they have all been significant fixtures over the past few weeks.

“We cannot get too bogged down in how games are billed and built up because the players need to go out and perform. That is the bottom line.”

Pearson will still be without full-back Kiko Femenia, who is struggling with a hamstring issue, but striker Danny Welbeck could soon be available for selection.

The former Manchester United and Arsenal forward has been sidelined since October with a hamstring problem.