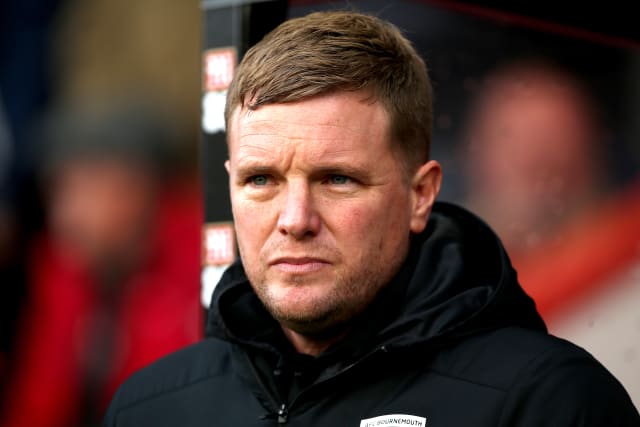 Eddie Howe admits he is struggling to switch off from Bournemouth’s alarming Premier League slump as his children have started to become aware of results.

Cherries boss Howe normally relaxes away from football by walking his dog or spending time with his three young sons, Harry, Rocky and Theodore.

But the 42-year-old revealed family time is now being adversely affected by his under-performing side’s dismal run of form.

“It goes without saying, you live, breathe every second of it,” said Howe.

“It affects your life, it affects everything when, in your own mind, you aren’t doing the job you want to do, defined by results.

“It really hurts and there’s only one way to fight back, keep going and try and prove people wrong.

“At the moment, I’m not doing too much (outside of work), to be honest – you focus on the job.

“Being with my kids is a nice escape for me, although they are beginning to be aware of results so even that’s quite difficult at the minute! But still spending time with them and being a dad is nice.

“I’m living my life to try and improve results and try and improve performances of my players and until that happens I won’t allow myself any kind of escapism because it’s too important that we try and turn things around.”

Beleaguered Bournemouth were beaten by rock-bottom Norwich on Saturday.

Ahead of the trip to Carrow Road, Howe was forced to dismiss reports he had been asked to resign.

Weekend draws for the four teams immediately above the 19th-placed Cherries mean they are now three points from safety going into successive league matches against fellow strugglers Brighton and Aston Villa.

Howe, the top-flight’s longest-serving manager, believes his club must ignore outside negativity and present a united front to arrest their dismal run of form.

“Fighting back collectively with everyone connected with the club that wants us to do well, that’s really what we have to focus on now and turn all energies against the world outside,” he said.

“We have to become very internal and use all the negativity around us in a positive way to show we’re still fighting and we can do it.”

Howe admits his players are suffering but insists they “care deeply” and are fully committed to rectifying the situation.

“I think the will to do well and the desire to achieve is 100 per cent there,” he said of his squad.

“It’s not always evident on the pitch because emotionally and human psychology is difficult sometimes to predict – confidence affects you in different ways.

“But I can assure everybody, the players care deeply, they’re really hurting at the moment and they want to come out of this spell as quickly as possible.”

Bournemouth will be without suspended defender Steve Cook, who was sent off against Norwich, when Graham Potter’s Seagulls visit the Vitality Stadium.