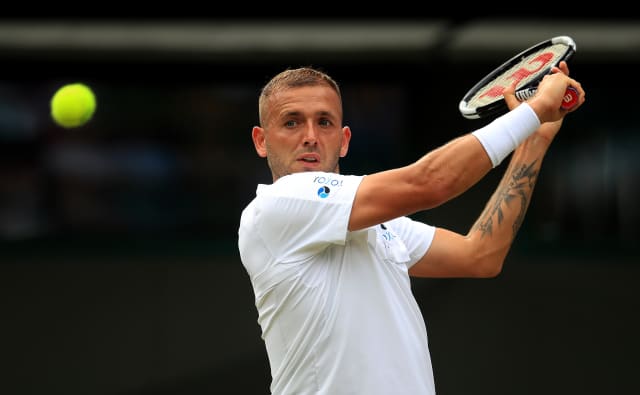 Dan Evans stared at an early exit from the Australian Open before turning things around against Mackenzie McDonald and recording the first five-set comeback of his career.

The British number one had never previously won a match after losing the first two sets but he found his game just in time at a chilly and blustery Melbourne Park to win 3-6 4-6 6-1 6-2 6-3.

Evans cut a frustrated figure during the first two sets, shouting frequently at his support camp and hurling his racket in anger during a tense final game of the second set.

His terrific form in the ATP Cup elevated his ranking to a career-high 32 ahead of the tournament, earning him a seeding for the first time at a grand slam.

Evans spoke ahead of the tournament about the need to handle the status of favourite and impose his game on lower-ranked opponents, something he certainly was unable to do against world number 129 McDonald.

He cited fatigue after an intense start to the season for his early struggles and demeanour, saying: “When you are tired, your patience is less and that is just how I thought I was today.

“I was frustrated over not a lot really. When you are two sets to love down, you think you are going home. I was just happy to turn it. Once I had got up in the third, I felt pretty good that he was flagging a bit and I was going up.

“I just hung in, I felt my level was there somewhere. I changed my game a little bit, started making a few more balls and in the end I thought I was pretty strong.

“I’m just relieved to have come through and started some momentum in this tournament. It would have been a poor end to a good trip to have lost first round.”

McDonald missed the second half of last season through injury and he faded after an impressive start, with Evans seizing the initiative at the start of the third set and not letting go.

At the end of the match he patted his stomach in an apparent reference to Tim Henman’s jibe that he “could miss a few meals”.

“It was just a bit of a joke to the guys in the corner,” he said.

“I am in good shape – there is no question about that. I have got strong legs and a good set of lungs. Everyone can be in better shape but I am still trying to improve on and off the court.

“After this tournament, maybe take this conversation into a room and see if he has got a point or not.”

Evans revealed he is in talks over a new clothing sponsorship deal, and a third-round clash with Novak Djokovic would raise his profile further, but first he must beat talented Japanese player Yoshihito Nishioka, who he has lost to twice, including in Washington last summer.

“If I’m being totally honest, I had a really bad mental performance last time,” said Evans.

“It was just before I split with my coach (David Felgate) so I wouldn’t read too much into the last one. We’ll see what happens. He moves well, good backhand, doesn’t come in so well, not such a good serve but he’s pretty quick and likes to counter-punch.”