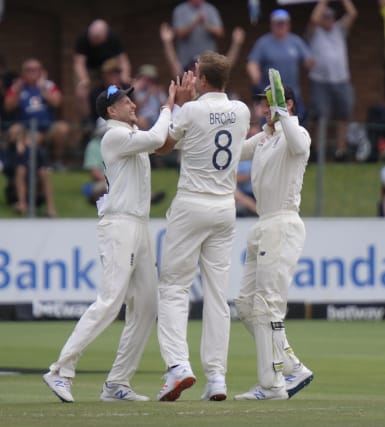 England wrapped victory by an innings and 53 runs on the fifth morning of the third Test against South Africa, guaranteeing an unassailable 2-1 lead after finally ending a remarkable last-wicket stand.

The tourists needed four wickets at the start of play and threatened to race over the line in style as Stuart Broad, Mark Wood and Dom Bess left the Proteas on the brink at 138 for nine.

They were one ball away from a triumphant finish to their stay in Port Elizabeth but found themselves subject to an astonishing display of tailend hitting as Keshav Maharaj (71) and Dane Paterson (39no) swung their way to a 99-run partnership.

With the ball disappearing to all parts of the ground it required a run out to finish the job, Curran throwing down the stumps as Maharaj sprinted to bring up the century stand.

The result marks a notable achievement for Joe Root and his side, the first time England have enforced a follow-on overseas since 2013 and the first time they have done so in a winning cause since 1992 in Christchurch, but the captain took the brunt of the late fireworks himself.

Bowling on longer than he should have as he looked to convert his career-best overnight figures into a maiden five-wicket haul, the skipper sent down 11 wicketless overs for 56, South Africa scored 28 off the last of them – 24 from Maharaj’s bat and four byes – to equal the Test record for most runs in an over.