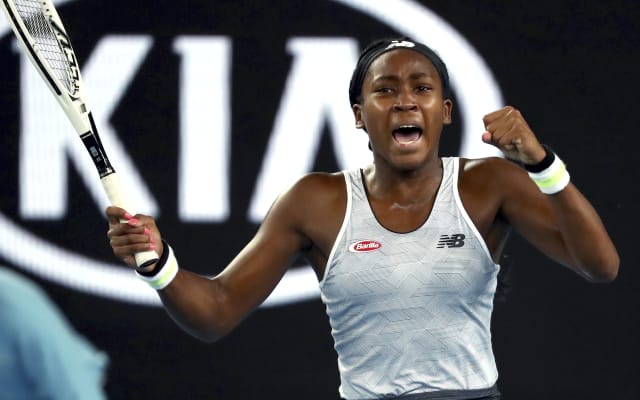 Coco Gauff defeated Venus Williams again in the first round of the Australian Open.

The 15-year-old’s success in the first round at Wimbledon last summer catapulted her to global stardom.

With Gauff now a top 100 player – and 39-year-old Venus having been a doubt for the tournament with a hip injury – it was far less of a surprise to see the teenager come through 7-6 (5) 6-3 under the roof on Margaret Court Arena.

The young American’s achievements should certainly not be taken for granted, though, and she showed maturity well beyond her years to battle through after nerves kicked in during the first set.

Gauff led 5-3 and had three sets points, while a 5-2 lead in the tie-break also disappeared, but a missed backhand volley from Venus at 5-6 helped her young opponent over the line in the opener.

There were no wobbles in the second, and Gauff said: “That was really difficult, she played really well. I was really nervous for today’s match. I was a bit shocked, I’m sure everybody was shocked, when they saw that draw but I’m really glad to get through it.”

The 38-year-old is making her latest bid to equal Margaret Court’s record of 24 grand slam singles titles having lost in four finals since returning to the tour nearly two years ago after the birth of daughter Olympia.

Serena appears particularly determined to make this the one, and she said: “I think it’s factored a lot into my game, and now it’s just more or less about doing the best that Serena Williams can do.

“Margaret Court was a wonderful, great champion. And now how great is Serena Williams? That’s it. That’s kind of what I have been thinking about the last couple of weeks and months. It definitely helps me relax a lot.”

Most headlines surrounding Court these days are for her views on LGBTQ issues but the tournament is marking, if not overtly celebrating, the 50th anniversary of her calendar Grand Slam and she was a guest on Rod Laver Arena for the first day’s action.

Serena made a rare appearance at a warm-up tournament in Auckland earlier this month and ended the week with her first trophy for three years.

Olympia came on court for the trophy ceremony, but Serena revealed the toddler had no interest in her achievement.

The eighth seed, who politely declined to answer a question about her close friend Meghan Markle, said: “She only cares about Play-Doh and (her doll) Qai Qai. I try to tell her I’m somebody, you know.

“I’m just known around town as Olympia’s mom, to all of her friends. I just love that, absolutely love that.”

Defending champion Naomi Osaka had a minor scare when she trailed Czech Marie Bouzkova 4-2 in the second set but she reeled off the next four games to win 6-2 6-4.

Osaka has cut a relaxed figure here so far and appears to have learned from her struggles of last year, when the pressure of world number one status weighed heavily.

She said: “I understand that I don’t have to play perfect in the first round. It’s more about building your level up and getting comfortable with yourself.

“Also just understanding that every match you play is probably going to be very difficult and being OK with that.”

Petra Kvitova, who Osaka beat in a dramatic final 12 months ago, was the quickest winner of the day, taking just 50 minutes to swat aside fellow Czech Katerina Siniakova 6-1 6-0 under the roof on Margaret Court Arena.

Caroline Wozniacki began her final tournament with a 6-1 6-3 victory over American Kristie Ahn while there were also wins for 13th seed Petra Martic and 14th seed Sofia Kenin.